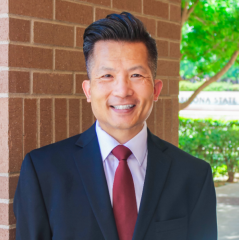 Daniel D. Liou is an associate professor of educational leadership at the Mary Lou Fulton Teachers College at Arizona State University. His research examines the sociological manifestations of expectations in the organization of classrooms, schools, and society, contextualizing educational practices in relational, curricular and institutional terms. Liou is an elected member and the president of the Los Angeles College Prep Academy School Board.

Liou earned his BA (high honors) in Asian American studies at University of California, Berkeley and MEd in administration, planning, and social policy at Harvard University. He completed his doctorate in social sciences and comparative education with sub-specialization in race and ethnic studies in education at University of California, Los Angeles. Liou was raised in a low-income, immigrant, single-parent household. He was the first in his family to graduate from high school and college, giving him a unique perspective into the strengths and aspirations of traditionally marginalized student populations.

In 1996, Liou was recognized by the Berkeley Unified School District for his advocacy work with immigrant students and families, and in 1997 Berkeley High School presented him with the Excellence Service Award for building an effective family-school engagement program with the bilingual community. He twice received the Most Inspirational Award from the University of California at Berkeley for creating a K-12 outreach program to pair undergraduate mentors with first-generation, immigrant, and refugee students to support their college-going expectations. From 2015-2020, Liou served as an appointed member of the Equitable and Inclusive Practices Advisory Council at the Arizona Department of Education. In 2015, he was awarded the Social Justice Teaching Award in Educational Leadership from American Educational Research Association, and in 2017, the Mary Lou Fulton Teachers College recognized him as its Outstanding Promising Research Scholar.

Dr. Liou’s research examines three interrelated themes regarding how the sociology of expectations fosters conditions of equity and justice in the educational pipeline: curriculum and instruction; school and community leadership and transformation; and higher education. His work contributes to the national and international conversation on education in three major ways. First, he examines the ways in which the sociology of expectations is manifested through teaching, leadership, and organizational practices. Second, he encourages the shifting of the mindsets and belief systems of PK-20 educators from deficit-based to asset-based perceptions of Students of Color. And finally, he works to activate social justice beliefs and expectations to ignite asset models of education, reaffirming the knowledge and humanity of marginalized communities.

Dr. Liou is the author of more than 50 peer-reviewed journal articles, book chapters, technical reports, and other publicly accessible scholarship. His most recent work has been published in Journal of Latinos and Education, Educational Administration Quarterly, and Race Ethnicity and Education.