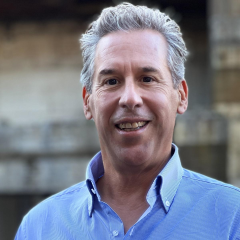 In March 2020, Tebeau co-created and co-directs A Journal of the Plague Year: An Archive of Covid-19, an international curatorial consortium that is building a crowdsourced digital archive documenting the pandemic. With attention to silences evident in tradtional archives, JOTPY is connecting and linking data drawn from around the United States and the world into an archive that will help present and future researchers understand this tenuous moment.

Tebeau leads the development of Curatescape a framework for mobile publishing that seeks to make open-source and/or low-cost hosted mobile tools available to scholars and curators. With funding from the NEH Office of Digital Humanities, Curatescape is being used by more than 20 cultural organizations, universities, and heritage preservation organizations to curate landscapes and museums. Projects include Salt River Stories, Cleveland Historical (which Tebeau co-directs), Spokane Historical, Baltimore Heritage, New Orleans Historical, Explore Kentucky, and Connecticut Communities.

Prior to joining Arizona State University in 2013, Tebeau directed the Center for Public History + Digital Humanities at Cleveland State University. Tebeau and the center collected more than 1200 oral histories that explore the history of the Northeast Ohio region.

As an urban historian, Tebeau’s first book, "Eating Smoke: Fire in Urban America, 1800-1950" (Johns Hopkins, 2003) examined how urban residents physical and metaphorically constructed American cities in response to the risk of fire. He is now completing a book that explores the history of public gardens, monuments, and public art through the lens of the Cleveland Cultural Gardens.

Tebeau's research explores the changing historical construction of cities, landscapes, and place. In particular, his work has focused on how gardens, urban monuments, and memory landscapes have been imagined in the United States and across the globe. As a public historian and digital humanists, Tebeau argues that scholars have become curators and that urbanists should reimagine the field to curate cities as living museums.

As an urban historian, Tebeau has explored how the danger of fire shaped cities from the 18th century into the 21st century. Eating Smoke contrasts how firefighters confronted fire danger through physical labor and a cult of heroism with fire underwriters transformation of fire hazard into abstract risks calculated and commodified on statistical ledgers. Eating Smoke shows how the modern city became less subject to sweeping center city fires, even as the particular risks of fire shifted toward the suburbs and beyond.

Tebeau's current research explores how diverse American communities created monumental conversations in cities, parks, and gardens across the United States. Using the Cleveland Cultural Gardens as a lens, Tebeau seeks to show that monuments took on lives that traversed national boundaries, creating global conversations about identity and culture. At the same time, local communities and neighborhoods deployed and redeployed

As a public historian, Tebeau has held fellowships and curated exhibits at the Smithsonian Institution, Mercer Museum-Bucks County Historical Society, and the Missouri Historical Society. Prior to beginning entering the professoriate, he held curatorial positions at the Cleveland History Center (Western Reserve Historical Society.) With over two decades of museum and community history experience, Tebeau's work has included developing exhibits, public programs, and educational activities, including walking tours to digital collecting projects, and interpretative projects with public arts agencies.

As a digital historian, Tebeau developed the place-based mobile application Cleveland Historical, which became the prototype for Curatescape, a framework for mobile curation that allows scholars, museums, and main street preservation advocacy groups to curate landscapes as living museums. He presently works with Arizona State University students to interpret the history of the greater Phoenix region through Salt River Stories.

As an oral historian Tebeau has both collected oral histories and developed digital tools for evaluating oral histories, including SocialScribe. Tebeau received oral history training at the Rural Folklife Center at Kenyon College under the direction of the Library of Congress's American Folklife Center. Building on his work documenting industrial workers in Cleveland and then the history of the Cleveland Cultural Gardens, in partnership with Cleveland NPR affiliate WCPN, Tebeau initiated and developed the Cleveland Regional Oral History Collection, now a digital archive with more than 1200 interviews at Cleveland State University, which is also available through the Cleveland Voices Podcast.

Understanding how senses of place and space can be expressed, understood, and imagined in collaboration with public audiences remains a vexing problem for urban (and rural) communities across the globe. Storytelling and community building around history remain powerful tools in connecting individuals to one another and their environments. More critically, engaging publics in this process, training them to be stewards of place and storytellers, stands at the heart of both rebuilding civil society and creating a more vibrant, diverse, and tolerant citizenry.