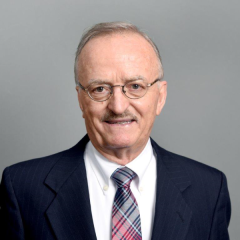 Constantine A. Balanis has been with ASU's School of Electrial, Computer and Energy Engineering (formerly Department of Electrical Engineering) since 1983, where he is now Regents Professor. His research interests are in computational electromagnetics, smart antennas, antennas, microwaves, and multipath propagation.

He received in 2004 an Honorary Doctorate from the Aristotle University of Thessaloniki, the 2005 Chen-To Tai Distinguished Educator Award from the IEEE AP Society, the 2000 IEEE Millennium Award, the 1996 Graduate Mentor Award, Arizona State University; the 1992 Special Professionalism Award from the IEEE Phoenix Section, the 1989 IEEE Region 6 Individual Achievement Award, and the 1987-1988 Graduate Teaching Excellence Award, School of Engineering, ASU. Balanis is a Life Fellow of the IEEE, Distinguished Lecturer for the IEEE Antennas and Propagation Society, and editor for the Morgan & Claypool Publishers series on "Computational Electromagnetics" and on "Antennas and Propagation."