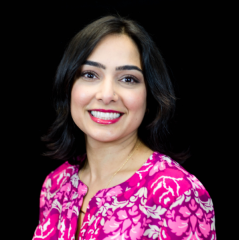 Natasha Behl is associate professor in the School of Social and Behavioral Sciences at Arizona State University. Dr. Behl completed her doctorate in political science at University of California, Los Angeles, where her training focused on race, ethnicity, politics and comparative politics.

Dr. Behl explains why the promise of democratic equality remains unrealized, and identifies potential ways to create more egalitarian relations in liberal democracies and the discipline of political science. This intellectual endeavor has demanded that she cross disciplinary boundaries and challenge epistemological and methodological norms in political science to understand the gendered and raced nature of politics as a practice and political science as a discipline. She uses interpretive, feminist, and decolonial methods to examine what are often assumed to be neutral concepts, objective methodologies, and universal institutions, and demonstrate that these very concepts, methodologies, and institutions are gendered and raced such that they determine who enjoys democratic inclusion, who commands academic authority, and who is most vulnerable to violence.

Dr. Behl’s book, Gendered Citizenship: Understanding Gendered Violence in Democratic India, is published with Oxford University Press. The book received the American Political Science Association’s 2021 Lee Ann Fujii Award for Innovation in the Interpretive Study of Political Violence, sponsored by the Interpretive Methodologies and Methods group. Her research is published in leading journals like PS: Political Science and Politics, Feminist Formations, and Politics, Groups, and Identities. She was awarded the Outstanding Teaching Award and Outstanding Faculty Mentor Awards at ASU. She was also awarded ASU’s Excellence in Diversity, Equity, and Inclusion Award and Social Impact Award. She has written for The Washington Post and Economic & Political Weekly, and given a TEDx Talk.