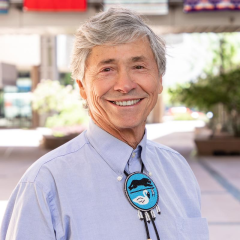 Robert J. Miller’s areas of expertise are Federal Indian Law, American Indians and international law, American Indian economic development, Native American natural resources, and Civil Procedure. He is an enrolled citizen of the Eastern Shawnee Tribe, the Interim Chief Justice for the Pascua Yaqui Tribe Court of Appeals and sits as a judge for other tribes. He is the Willard H. Pedrick Distinguished Research Scholar at ASU and the Faculty Director of the Rosette LLP American Indian Economic Development Program at ASU.

Before joining ASU in 2013, Professor Miller was on the faculty of Lewis & Clark Law School from 1999-2013. Prior to his career in academia, he practiced Indian law with Hobbs, Straus, Dean & Walker, and practiced litigation for the Stoel Rives law firm. Following graduation from law school, he clerked for Judge Diarmuid O’Scannlain of the U.S. Court of Appeals for the Ninth Circuit.

Professor Miller’s scholarly works include articles, books, and book chapters on a wide array of Federal Indian Law issues and Civil Procedure, and he speaks regularly on Indian Law issues across the U.S. and in other countries. He is the author of "Native America, Discovered and Conquered: Thomas Jefferson, Lewis and Clark, and Manifest Destiny" (Praeger 2006), and "Reservation Capitalism: Economic Development in Indian Country" (Praeger 2012). He co-authored "Creating Private Sector Economies in Native America: Sustainable Development through Entrepreneurship (Cambridge University Press 2019) and "Discovering Indigenous Lands: The Doctrine of Discovery in the English Colonies" (Oxford University Press 2010). Professor Miller has worked as a consultant with the American Philosophical Society since 2006 on tribal language and archival issues. He was elected to the American Law Institute in 2012 and to the American Philosophical Society in 2014.