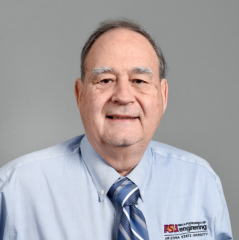 Jim Helm started his upper level education through the Naval Enlisted Scientific Educational Program (NESEP) many years ago and received his bachelor's degree in computer science. Helm then received his bachelor's and master's degree in communications engineering and used the GI Bill to complete an MBA. Helm has a doctorate in applied computer science.

Helm worked as submarine warfare specialty officer and he started his engineering and technology career working Navy programs at Naval Space Command in Dahlgren, Virginia. When he retired from the military, Helm moved on to Motorola in Chandler, Arizona where he worked for the Strategic Electronics Division as a Systems Engineer on Special Programs. While at Motorola, Helm was also a division system engineering manager, and he worked on the iridium program (a multi-billion dollar space-based cellular phone system) as design and integration lead engineer and then as chief engineer. Helm was also was the lead architect in the development of Secure Internet Communications for government agencies when Internet security was still in its infancy. Helm left Motorola to become the assistant general manager for wireless engineering for North America at NEC Corporation in Irving, Texas. He led a division that designed and developed cellular phones. Helm retired from industry in 2005 and started teaching at the university level.

Helm has a research interest in cybersecurity networking and cybersecurity education in support of Industry need. He is especially interested in creating a cybersecure Internet-based voting structure that could be used by the Department of Defense to allow deployed military the opportunity to vote online.

Helm is currently the information technology program chair within the Polytechnic School and Ira A. Fulton Schools of Engineering at Arizona State University.