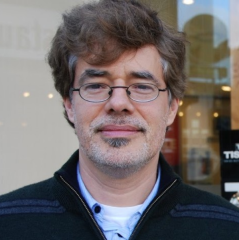 James Lyon's research has evolved from the chemistry of planetary atmospheres (Caltech), to the O and S isotope composition of planetary atmospheres and the solar nebula (UCLA, ASU), to, most recently, laboratory studies of IR spectrosocopy with application to upcoming observations of exoplanet atmospheres. He makes frequent trips to synchrotrons (Soliel in France; ALS in Berkeley) to carry out the isotopic and IR work.

1. Sulfur isotopes in early Earth: My objective in this research is to determine the mechanism by which S mass-independent fractionation (S-MIF) occured on the Archean/Paleoproterozoic Earth. Mass-independent isotope fractionionation describes isotope signatures that do not follow the usual mass-dependent relationship of isotopic abundances. Chemical bond vibrational frequencies (and zero-point energies), diffusion, evaporation, and gravitational separation, are all examples of processes that produce a mass-dependent relationship in the abundances of the isotopes of a given element. By contrast, mass-independent fractionation (MIF) most often arises from photochemical processes, such as self-shielding during photon absorption, which filters radiation according to isotope abundance rather than isotope mass. Non-statistical effects in chemical reactions are another important source of MIF, with ozone being the archtypal example. For the early Earth, we can clearly see a S-MIF signature in sedimentary rocks, and we believe it's derived from photochemistry in the atmosphere, but the exact mechanism is still unkown. To solve this problem, I and my colleagues study the VUV (electronic) spectroscopy of various small sulfur-bearing molecules containing different sulfur isotopes (32S, 33S, 34S, 36S). This work involves a confluence of chemistry, spectroscopy, and radiative transfer. With a mechanism for early Earth S-MIF in hand, we will be able to better quantify the early Earth sulfur cycle and atmospheric composition.

2. Oxygen isotopes in the solar nebula: The distribution of O isotopes in solar system materials exhibits a wide range of values that are diagnostic of specific processes that occurred in the solar nebula or in the parent cloud. In particular, the Sun and CAIs (calcium-aluminum inclusions) are mass-independently fractionated relative to Earth, Moon and Mars, with a D17O ~ -25 permil relative to VSMOW. As with S-MIF on early Earth, the O-MIF in the Sun and CAIs is most likely due to a photochemical process, namely CO self-shielding. Either in the FUV-surface layer of the solar nebula or in the parent molecular cloud, 12C16O was optically thick (at FUV wavelengths ~ 100 nm), resulting in reduced rates of 12C16O photolysis. Because 12C17O, 12C18O, and 13C16O do not become optically thick until much greater penetration depths into the column of CO gas (they are lower in abundance by ~ 2600, 500, and 90 times, respectively, relative to 12C16O), a zone of photodissociation is present with products (O and C atoms) highly enriched in the minor isotopes. These enriched O and C atoms are incorporated into water ice and C grains that can be transported inward in the solar nebula, enriching the isotopic composition of terrestrial planet materials. I and a groups of colleagues (in the US, Netherlands and France) measure and model the absorption cross sections of CO isotopologues, in order to get the isotopic fractionation due to CO photodissociation accurate to a degree that meaningful comparison with meteoritic and solar O isotope ratios can be made. We then model the fractionation with radiative transfer calculations in the solar nebula or parent cloud core. A similar approach is used for the evaluating the importance of N2 self-shielding to explaining N isotope differences in solar system materials.

3. Isotopic composition of the Sun: Working with solar astronomer Prof. Tom Ayres at the University of Colorado, we have recently determined new C and O isotope ratios for the photosphere. This work involved a reanalysis IR observations of the Sun acquired by the shuttle-borne ATMOS FTS in the mid-1990s, together with corrections to the high-temperature rovibrational spectroscopy of CO. Using with Ayres’ radiative transfer models of the solar atmosphere that account for granulation (via a 3D hydrodynamic model), we find a d18O = -51 ± 11 permil (1-sigma) for solar CO. This result is consistent the photospheric value inferred by Genesis from measurement of solar wind. We also determine the C isotope composition of solar CO to be d13C = -48 ± 7 permil, implying that a similar enrichment of 13C occurred in terrestrial planet materials as occurred for O isotopes (~ 60 permil). Genesis has not yielded a C isotope ratio for solar wind, so, for the moment, our determination of solar d13C is the best available.  How the terrestrial planets became enriched in 13C is an interesting question. C chemistry is more complex than O chemistry, and we are presently evaluating the role of CO self-shielding in modifying 13C abundance in the solar nebula and parent cloud.

5. High temperature cross sections and pressure broadening for exoplanet gases: JWST will dramatically expand the parameter space for IR observations of exoplanet observations over Spitzer and HST. In addition, cross correlations techniques offer the promise of ground-based detections of various exoplanet atmospheric molecules, but require highly accurate high temperature line lists. We are presently measuring pressure broadening due to H2 in several gases at room temperature, and are preparing to measure high-temperature absorption cross sections at IR wavelengths. JWST is scheduled to launch in late 2018, making these measurements particularly timely.