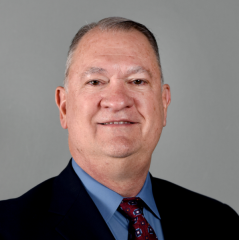 Wylie Bearup currently serves as a Faculty Associate in the Del E. Webb School of Construction (DEWSC).  He previously served as a full-time Professor of Practice and the Beaver-Ames Heavy Civil Engineering endowed chair from July 2014 to July 2020.  In that capacity, he has taught graduate and undergraduate-level classes, reviewed and submitted research proposals, and guest lectured on construction management topics in other courses.

Prior to joining ASU, Bearup worked for the City of Phoenix for 14 years and retired in April 2014 while serving as the City Engineer and Street Transportation Director. While with the City, Bearup pioneered the use of APDM creating processes and procedures to take full advantage of the new methods. Under his direction the City successfully completed more than 400 projects using Construction Manager at Risk, almost 100 Design Build projects, and approximately 5,000 projects using Job Order Contracting with an aggregate value greater than $6 billion.

Bearup was an active duty commissioned officer in the U.S. Army Corps of Engineers with assignments across the country and around the world. He retired as a Lieutenant Colonel in February 2000 after serving on active duty for 24 year career.

Bearup is a Registered Professional Engineer in Arizona. He has bachelor's and master's degrees from the University of Arizona in civil engineering, and a doctorate in construction engineering and management from the University of Illinois at Urbana-Champaign. In 2013, Bearup was selected as one of the Top Ten Public Works Leaders in the country by the American Public Works Association. In 2015, he earned the designation as a Design-Build Professional by the Design-Build Institute of America.

Bearup has been married to his high school sweetheart Yulon for 49 years and has two grown daughters, Darshon and Brianne, who are both ASU grads. Darshon and her husband Troy now live in Scottsdale and Brianne lives in Windsor, CO, with her husband Ryan and their three children, Lincoln, Wilhelmina and Phillipa.