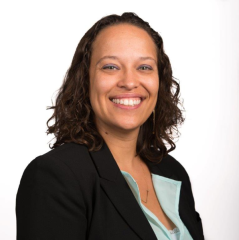 Aviva Dove-Viebahn joined the Film and Media Studies program in the Department of English in 2018, after six years as a faculty fellow in ASU's Barrett Honors College. She earned her doctorate in visual and cultural studies at the University of Rochester and her master's in art history at the University of Virginia. Prior to ASU, she taught film, women’s studies and the interdisciplinary humanities at the University of Northern Colorado. From 2012-2018, she was the Web Content Manager for the Society for Cinema and Media Studies and an ex-officio member of its Board of Directors.  Currently a contributing editor at Ms. magazine, she is responsible for its Scholar Writing Program and serves on the magazine's advisory Committee of Scholars. Ms. magazine frequently carries her essays and reviews in both its print edition and online.

Dove-Viebahn's academic interests concentrate on contemporary visual art and media, including film and television; gender, race, and representation in popular culture; and the role of the spectator in the digital age. Her dissertation, supported in part by an American Association of University Women fellowship, interrogated how, over the past decades, television with its ever-growing popularity and pervasiveness significantly influenced the ways we approach and interpret all visual objects in Western culture, from art and film to broadcast imagery and the Internet. In her early published work, she has explored such topics as violence and the gaze in CSI, nostalgia in Mad Men, and queer visibility in The L Word. She co-edited (with Karon Jolna) the digital anthology Gender, Race and Class: From the Pages of Ms. Magazine, 1972-Present (2015) and is co-editing (with Carrie Baker) a collection of essays for Lever Press entitled Public Feminisms: From Academy to Community. Her current in-progress book project explores representations of feminine intuition, as a contested and ambivalent form of gendered power and knowledge, in contemporary television.

In addition to her scholarly work, Dove-Viebahn has co-written a screenplay (with Brittany K. Fonte) in development with Women of Color Unite and has another feature screenplay in production.