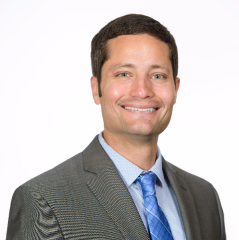 Kevin Correa is the director of the Student Success Center, which provides individualized and holistic peer coaching services to first-year students, sophomores, and transfer students on four ASU campuses.

Correa has enjoyed working in higher education for nearly two decades. He is passionate about helping students succeed and making a positive impact in their lives. Nearly his entire career has been devoted to the engagement, retention, and success of diverse student populations at large public universities, and much of his work has been in leadership capacities.

Correa has been with the Student Success Center since its first year; he was part of the leadership team that led the center's growth from an initiative with about 35 staff to an award-winning center with over 100 staff serving thousands of students each year.

Originally from the east coast, Dr. Correa earned a Bachelor of Arts in Sociology degree, with an emphasis on race, class, and gender, from the University of Michigan as a first-generation, low income, out-of-state student. He earned a master's degree in Higher and Postsecondary Education and a Doctorate of Education in Leadership and Innovation from ASU. Correa has also earned a certificate in personal development coaching from the Coaching and Positive Psychology Institute, he has completed the Foundations of Positive Psychology Coursera specialization from the University of Pennsylvania, and he is Dare to Lead trained.

In addition to leading the Student Success Center, Correa serves as a faculty associate in the Mary Lou Fulton Teachers College, where he teaches graduate-level courses in higher education. He co-authored a chapter in the book, Cultivating Student Success: A Multifaceted Approach to Working with Emerging Adults in Higher Education. He is currently President-Elect of the ASU Chicano/Latino Faculty & Staff Association, and he is the inaugural co-chair of the NASPA Success Coaching Knowledge Community.