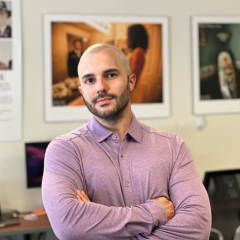 Manuel G. Aviles-Santiago is Associate Dean for Academic Programs and Curricular Innovation, Associate Professor of Communication and Culture at the College of Integrative Sciences and Arts, and Director of the Office of Veterans and Military Academic Engagement (OVMAE). He obtained his doctorate in media studies at the Department of Radio-TV-Film at the University of Texas-Austin. His most recent book, "Puerto Rican Soldiers and Second-Class Citizenship: Representations in Media," examines the cultural history of the imaginary of the Puerto Rican soldier, from representations in traditional media to self-representations in digital/social media. He is a Ford Foundation Pre-doctoral and Post-doctoral Fellow, an award administered by the National Research Council (now the National Academies of the Sciences, Engineering, and Medicine). He has worked for several research centers such as the Center for Communication Research and the Center for the Study of Latino Media and Markets.

Avilés-Santiago has worked as a research assistant and project manager for the Voces: Latino and Latina Oral History Project under the advisory of Professor Maggie Rivas-Rodriguez. He was invited by the National Forum on Higher Education for the Public Good, funded by the Carnegie Foundation, to research undocumented students in higher education. He has presented his works at conferences such as the International Communication Association, Race and Media, Society for Cinema and Media Studies, Latino Studies, the Latin American Studies Association, and Veteran Studies conferences.

His work has been published in journals like Communication, Culture and Critique, Journal of Latin American Communication Research (JLACR), Caribbean Studies Journal, Flow TV, and Revista Cruces. He is also an editorial columnist for El Nuevo Dia newspaper and host for PBS's segment, Break It Down.

As director of the Office for Veteran and Military Academic Engagement, Avilés-Santiago has developed programs to bridge the military-civilian gap through teaching, research, and community engagement initiatives. He is the coordinator for the Veteran, Society, and Service certificate, funded by the National Endowment for the Humanities. At the moment, he is part of a grant-seeking initiative aimed at growing the number of veteran students from underserved populations in STEM degrees.