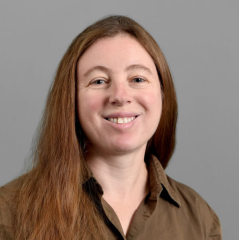 Yulia Peet is an associate professor of aerospace and mechanical engineering in the School for Engineering of Matter, Transport and Energy with the Ira A. Fulton Schools of Engineering at Arizona State University. Her Ph.D. degree is in Aeronautics and Astronautics from Stanford (2006), M.S. and B.S. degrees are from Moscow Institute of Physics and Technology (1999 and 1997). Her previous appointments include a Postdoctoral position at the University of Pierre and Marie Curie in Paris in 2006-2008, and a dual appointment as an NSF Research and Teaching Fellow at Northwestern and Assistant Computational Scientist at Argonne National Laboratory in 2009-2012. Her research interests include computational methods and high-performance computing, fluid mechanics and turbulence, with applications in wind energy, aerospace, and biological fluid mechanics. Peet was recently selected as an Alliance Fellow by Mayo Clinic (summer, 2018), as part of an interdisciplinary program pairing ASU and Mayo Clinic investigators.