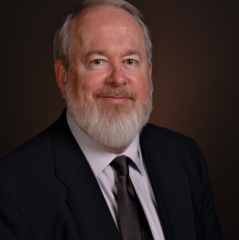 Professor Barry G. Ritchie is in the Department of Physics at Arizona State University's Tempe campus. With his research group and collaborators, he conducts experiments at international accelerator facilities aimed at better understanding how the protons and neutrons of atomic nuclei are constructed from quarks and gluons. He also co-leads Conversations on Religion, Ethics, and Sciences, a project in the Center for the Study of Religion and Conflict, funded by the John Templeton Foundation.

A member of the American Physical Society with more than 200 refereed publications, Professor Ritchie's research specialty is in experimental nuclear and particle physics. He has served on technical advisory panels at Los Alamos National Laboratory and at the Thomas Jefferson National Accelerator Facility (Jefferson Lab). He served as a postdoctoral research associate at both the University of South Carolina and the University of Maryland. Professor Ritchie's ASU research group has been funded by the National Science Foundation.

Professor Ritchie also teaches physics at the graduate and undergraduate levels. He has taught courses ranging from introductory freshman physics to graduate-level nuclear and particle physics. His abilities as a teacher have been recognized twice by the Outstanding Teaching Award from the Department of Physics and also with the Dean's Quality Teaching Award from the College of Liberal Arts and Sciences.

He has also held a number of key administrative roles during his career at ASU. Most recently, he served as Senior Advisor to the Provost (2015-2016). He was Vice Provost for Academic Personnel, providing oversight for ASU's nearly 3,000 faculty members and 2,400 academic professionals (2012-2015). From 2011 to 2013, he also directed the university-wide effort that successfully secured the reaffirmation of the accreditation of Arizona State University by the North Central Association Higher Learning Commission in 2013. Professor Ritchie served as Interim Vice President and Dean of the New College of Interdisciplinary Arts and Sciences at ASU (2006-2007). Prior to that appointment, he served as Chair of the Department of Physics and Astronomy (2000-2006), and Associate Chair from 1995-2000. He has been with ASU since 1984 and was promoted to professor of physics in 1996.