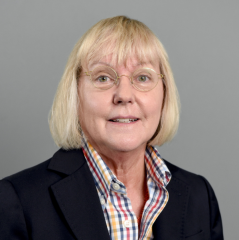 Claudia Brown joined the art history faculty at the Herberger College School of Art, Arizona State University in 1998. Recently, she served a four-year term as director of the ASU Center for Asian Studies.

Prior to coming to ASU Herberger College of the Arts, Professor Brown served as curator of Asian Art at the Phoenix Art Museum since 1979. She continues to serve as consultant Research Curator for Asian Art at Phoenix Art Museum, and published two of the museum’s exhibition catalogs, "Weaving China’s Past: The Amy S. Clague Collection of Chinese Textiles" (2000) and "Minol Araki" (1999).

While finishing her doctoral work in the history of Chinese art at the University of Kansas, Brown worked at the National Palace Museum, Taiwan, and taught at California State University Long Beach.

Professor Brown's art historical exhibitions, organized for the Phoenix Art Museum and other institutions, have been shown widely, including international venues at the Museum für Ostasiatiche Kunst, Berlin (1995); Musée Cernuschi, Paris (1999); Hong Kong Museum of Art (1993); and the Suntory Museum of Art, Tokyo (1988). Nationally, Brown's exhibitions have been presented at the Metropolitan Museum of Art, New York (1985); the China Institute in America, New York (1990 and 2003); the Denver Art Museum (1992); Honolulu Academy of Arts (1993); and the Arthur M. Sackler Museum at Harvard University (1991).

Her research and teaching interests lie in later Chinese painting and decorative arts, museums and exhibitions. She has lectured in China, India, Korea and Taiwan. Her book, "Great Qing: Painting in China, 1644–1911," was published by University of Washington Press in 2014.  She is currently working on a book on the arts of the Qing dynasty.

Her research and teaching interests lie in later Chinese painting and decorative arts, museums and exhibitions.

Clarity and Luster: New Light on Bronze Mirrors in Tang and Post-Tang Dynasty China and Myriad Points of View: New Research on Ming and Qing Paintings in the Roy and Marilyn Papp Collection, which appeared in 2005-06. Her articles appeared in Between the Thunder and the Rain: Chinese Painting from the Opium Wars to the Cultural Revolution, 2000; Beyond Yixing: The Ceramic Art of Ah Leon, 1998; and Worlds Within Worlds: Chinese Scholars’ Rocks from the Richard Rosenblum Collection, 1997. She was co-author of Transcending Turmoil: Painting at the Close of China's Empire, 1796-1911, 1993; and The Elegant Brush: Chinese Painting under the Qianlong Emperor, 1735-1795, 1985.

Her book, Great Qing: Painting in China, 1644–1911, is in production at the University of Washington Press.