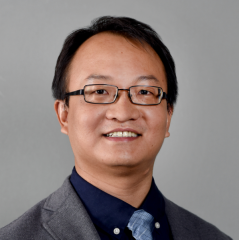 We conduct both field measurements and numerical modeling to investigate the physics of flow and the transport of energy in urban canopy layers. Field measurements consist of deployment of a sensor network with a wide range of sensing instruments, including the eddy-covariance tower, wireless micrometeorological stations, the scintillometer, the SODAR system and other sensors. It is aimed to provide long term monitoring of the urban environment in the developing urban areas of the great Phoenix area.

Multi-scale multi-physics numerical modeling is developed as a powerful tool to tackle urban environmental problems, ranging from local (~10-100 m) to neighborhood (~ 1 km) to meso (~100 km) scales. The integrated model also embraces a variety of physical components: the boundary-layer meteorology in canopy layers, the subsurface transport of heat and water, the mesoscale atmospheric dynamics and the building energy system. Coupling of different scales and interaction of different physics requires a dedicated research effort.

Stochastic simulations are also involved in quantifying the important physics in numerical models, using Monte Carlo techniques. A perspective research area will be using Stochastic Langrangian modeling for the dispersion of pollutant in urban areas, as well as to investigate the footprints of field measurements.