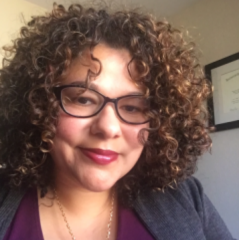 Sujey Vega is an Associate Professor of Women and Gender Studies and affiliate faculty member in the School of Transborder Studies and Religious Studies at Arizona State University. Her research explores the every day lived experiences of Latina/os in the U.S. By looking to moments of belonging, she traces the way Latina/os make their own notion of home in the U.S. Using ethnography, oral history and archival analysis, Professor Vega's research includes race/ethnic studies, social networks, gendered experiences and ethno-religious practices. Her previous work focused on non-traditional Latino settling locations in Indiana to expand the notion of the borderlands to these otherwise "new" or not previously recognized Latino communities. Her book, Latino Heartland: Of Borders and Belonging in the Midwest (2015, NYU Press), places in dialogue Mexican Hoosiers and non-Mexican (mostly White) Hoosiers of Indiana as they both come to terms with living in the same communal space. The book's focus includes ethno-religious practices, comadrazgo (female social networks), ethnic solidarity and community organizations that helped Mexicans  assert a right to belong in a Midwestern city. Professor Vega's current project historically locates the growth of Latina/o LDS members in the Phoenix area and the role the LDS church plays in the lives of current Latino Mormons. She is particularly interested in gendered social networks, primarily the Relief Society as it engages Spanish-speaking women in church leadership and the pull/push factors that have attracted Spanish-speaking members to Mormonism in record numbers.

Hyperempathy as A Call for Futurist Survival: Octavia Butler, Double Consciousness, and Characters of Color that frame the Way Forward

Socorro Across The Ages: Latina Social Networks in the Church of Jesus Christ of Latter Day Saints

Aug 22, 2016. Featured expert in story: The Future of the Mormon Church? It's Latino, by Raul A. Reyes. NBC News Latino Section.

March 29, 2016. Story on my presentation (March 11, 2016) on Latina female social networks in the Church of Jesus Christ of Latter Day Saints.

March 28, 2016. Interview on Borderlands History Blog about my work on Latino/a experiences in the LDS Church.

September 23, 2015. “#WomynConvoWendesdays start off the year with conversations about intersectionality.” http://www.statepress.com/article/2015/09/hashtag-womyn-convo-wednesdays

October 2014. Expert interview. Telemundo Arizona. Latino Mormons for the grand opening of the 3rd LDS Temple in the Valley (Phoenix). To be aired on October 10, 2014.

August 2014. Featured author in Law Professors BLOGS Network on piece covering the publication chapter in The Criminalization of Immigration: Contexts and Consequences, (2014). With over 14 authors included in the edited volume, I was the only author named in the blog. http://lawprofessors.typepad.com/immigration/current_affairs/page/12/