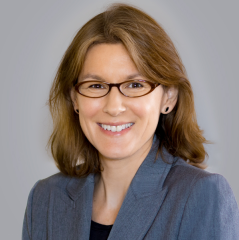 Anna Cichopek-Gajraj, a native of Kraków, Poland, joined School of Historical, Philosophical and Religious Studies in 2011. She is also affiliated with the Center for Jewish Studies and the Melikian Center for Russian, Eurasian, and East European Studies. Her research focuses on Polish-Jewish relations, antisemitism, and ethnic violence in Poland and in Polish-Jewish diaspora after the Holocaust. She teaches courses on the Holocaust, Modern Jewish History, East European Jewish History, History of Antisemitism, Poland in WWII, and Western Civilization, among others.

She is an author of two books on postwar Polish-Jewish history. Her recent publication, "Beyond Violence: Jewish Survivors in Poland and Slovakia in 1944-1948" (Cambridge University Press, 2014), is a comparative study of the non-Jewish/Jewish relations in Poland and Slovakia after the Second World War. The book was the 2016 Jordan Schnitzer Book Award Finalist (2nd place) and a recipient of the 2015 Barbara Heldt Prize Honorable Mention. Her first book "Pogrom Żydów w Krakowie 11 sierpnia 1945 r," a case study of the pogrom in Kraków in August 1945, was based on her awarded MA thesis and published by the Jewish Historical Institute in Polish in 2000.

She is a recipient of the 2016 Shofar Zakhor Award from the Phoenix Holocaust Survivors' Association for “exhibiting and carrying the work of Holocaust education, Holocaust remembrance, and community interaction.” She has served as director for Poland for John J. Hartman's non-profit Foundation of Remembrance and Reconciliation for the restoration of Jewish heritage in Poland. She has also received numerous grants and fellowships from the United States Holocaust Memorial Museum in Washington DC, the YIVO Institute, and the Memorial Foundation for Jewish Culture in New York, among others.

She currently works on the social history of the global postwar displacement of Polish Catholics and Polish Jews in the first twenty years after World War II (1945-1965).

Previous research: postwar comparative and social history of Jewish survivors in Poland and Slovakia (including everyday life and return to “normality,” reconstruction and rebuilding, identity and citizenship, property restitution, and violence).

Awarded:The 2016 Jordan Schnitzer Book Award Finalist (2nd place) in the category of Modern Jewish History and   Culture: Europe and Israel by Association for Jewish Studies. and 2015 Barbara Heldt Prize Honorable Mention for the best book by a woman in Slavic, East European, and Eurasian Studies by the Association for Women in Slavic Studies.

2016 Shofar Zakhor Award by the Phoenix Holocaust Survivors' Association for exhibiting and carrying of the work of Holocaust education, Holocaust remembrance, and community interaction (2016).

2015 Barbara Heldt Prize Honorable Mention for the best book by a woman in Slavic, East European, and Eurasian Studies by the Association for Women in Slavic Studies (2015).

Society for the History of Czechoslovak Jews in New York