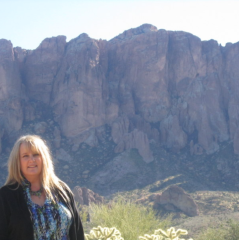 Katherine M. B. Osburn is an ethnohistorian focusing on gender, race, political activism, and identity. She has published articles on the Navajos, the Southern Utes, and the Mississippi Choctaws in a variety of scholarly journals and edited collections. Her first monograph, "Southern Ute Women: Autonomy and Assimilation on the Reservation, 1885-1934," analyzed how Ute women responded to gendered assimilationist policies and is in its second edition. Her second monograph, "Choctaw Resurgence in Mississippi: Race, Class, and Nation Building in the Jim Crow South, 1830-1977," examines Choctaw identity formation and performance in political activism. She is currently working on a study of the relationship between Arizona's Indigenous nations and their elected officials tentatively titled "Indigenous Citizens."

“Never again” and “never before” are equally powerful and problematic statements born out of the horrors of the Holocaust. Yet genocide was committed many times before and after the Nazi murder of the European Jewry. In view of different forms of genocide and the problem of finding meaningful ways to understand and commemorate them, our trans-disciplinary group seeks a framework to understand three instances of mass murder: the Holocaust, the massacre and displacement of Native Americans in the United States, and the slaughter of Tutsi in Rwanda.

This book was featured in the critically important Supreme Court case, Dollar General v. Mississippi Band of Choctaw Indians. See my blog about it for the press: https://unpblog.com/2015/12/04/from-the-desk-of-katherine-m-b-osburn-dollar-general-v-miss-choctaws/

“Any Sane Person’: Race, Rights, and Tribal Sovereignty in the Construction of the Dawes Rolls for the Choctaw Nation.” The Journal of the Gilded Age and Progressive Era vol. 9, no. 4 (October, 2010): 451-471.

“How Did White Women Reformers with the Southern Utes Respond to Gendered Assimilationist Indian Policies?” Women and Social Movements in the United States, 1600-2000 (Summer 2004) http://www.alexanderstreet6.com/wasm

“’In a Name of Justice and Fairness’: The Mississippi Choctaw Indian Federation v. the BIA, 1934,” Chapter Six of Beyond Red Power: Indian Activism in the Twentieth Century. Dan Cobb and Loretta Fowler, eds. (Santa Fe: The School for Advanced Research Press, 2007): 109-123

“‘I Am Going to Write to You’: Nurturing Fathers and the Office of Indian Affairs on the Southern Ute Reservation, 1895-1932,” in A Shared Experience: Men, Women, and the History of Gender. Laura McCall and Donald Yacovone, eds. (New York: New York University Press, 1998): 245-270.

Reprinted as: “Fatherhood and Assimilation among the Southern Utes,” in Major Problems in the History of American Families and Children. Anya Jabour, ed. (New York: Houghton Mifflin, 2004): 240-248.

”Major Ridge,” (with Jennifer Kimbro) in The Tennessee Encyclopedia of History and Culture (Nashville: The Tennessee Historical Commission, 1998): http://tennesseeencyclopedia.net/entry.php?rec=1129.

Contributing Editor, Study Guide for "The World: A Televi­sion History".  Robert E. Roe­der, ed. (New York: Harper & Row Publishers, 1986). Essays in this volume include: "Hu­nting and Gathering Societies," "The King­dom of Ghana," "The Kingdom of Benin," and "The Aztec and Inca Empires."

My third monograph will be a cultural-political history of American Indian activism in Arizona beginning with the racial politics of statehood and ending with state-tribal revenue sharing under the New Federalism. I continue my interest in the intersections between indigenous identity and political activism in the context of power relationships under colonialism. My focus on the alliances between Indians and their elected officials at the state level is unique in a field dominated by studies of Indian activism at the federal level.

NEH Research Fellowship, Spring 2008. This is one of only fifty awards given nationwide to support a sabbatical for research. Amount: $25,000.00, for a half-year sabbatical.

Recipient of a grant from the Phillips Fund for Native American Research from the American Philosophical Society, 2002-2003. Amount: $5,000.00.

Nominated for the Joan Jensen-Darlis Miller Award for the best article published in 1997 in the field of the history of women in the Trans-Mississippi West by the editors of the Journal of Women's History.

I have reviewed manuscripts for the following journals and scholarly presses:

Editorial Board for the Journal of the History of the Gilded Age, Progressive Era, 2008-2010

SHGAPE, (Society for the History of the Gilded Age and Progressive Era) Governing Board, 2008-2010.

H-SHGAPE, (Society for the History of the Gilded Age and Progressive Era) Online editor, 2001-present; Senior editor in charge of coordinating editing schedules.

Editorial Board, Women and Social Movements Web Site, Center for the Historical Study of Women and Gender, S.U.N.Y. Binghamton, 2000-present.

The Barbara Sudler Award Committee for the Best Book on Women in the West, The Colorado Historical Society, 1998.

Revitalization of H-AmIndian: I have re-booted this H-Net scholarly list-serve based at ASU by hiring new editors and a blogger on Indigenous issues, and bringing back the book reviews.

Faculty advisor to History for the People, A graduate student project, 2011-2013.

Max Millet Graduate Student Travel Award, Chair, 2012, 2013. In addition to allocating funding for research travel, this service also involves sending a report to the widow of the donor, an ASU history alumnus.

Curriculum and University Development and Governance

Interdisciplinary Committee to design a Sustainability Studies Major, 2010-2011. We succeeded in creating this new major—the first in Tennessee.

Dean’s Committee to create an Interdisciplinary Master’s Program, 2002. We succeeded in creating this MA program.

Service to the Honors Department

“Student Activism in the New Millennium,” 2001. This presentation was an overview of student activism in Appalachia and the opportunities for students to get involved in public decision-making.

“Higher Education and Tax Policy,” 2000. This presentation explained how the state apportioned funds for higher education and how a proposed state income tax could benefit college students.

“The Battle for Fall Creek Falls," 1998. This presentation was an overview of a citizens’ campaign I worked on to win a Lands Unsuitable for Mining Petition to protect the state’s most beautiful park from proposed strip mining nearby.

Advisory Council on Tennessee Indian Affairs, 2007- 2011. This council reported on issues relevant to Indians in Tennessee to the Executive Branch of the Tennessee Government.

Save our Cumberland Mountains, a grassroots organization promoting environmental, economic, and social justice in Appalachia, 1995-2003.

Review of the Permitting Process of the Big Brush II Strip Mine, (Knoxville, TN: The Office of Surface Mining, 2001).

RESEARCH AND CONSULTING FOR MEDIA

Commentator, Indian-White Relations in the Southeast, for the video recording, The Peoples of Appalachia.Gannett Productions, KUSA-TV, Denver, CO

Director of Research "How the West Was Lost," 1992, which won the ACE (Award for Cable Excellence) Award for best educational series on cable tele­vision.