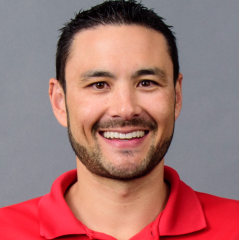 Caleb E. Jay has taught various Sports Law classes at the College of Law since 2011.

Professor Jay spent 11 seasons with the Oakland A's, joining the team as a bat boy in 1995, and working his way up to Assistant General Counsel, a position he held from 2003-2005. From 2006-2007, he was an associate with Carroll, Burdick & McDonough LLP, where he practiced real estate, business, and corporate law.

Professor Jay’s prior teaching experience includes serving as an adjunct professor at Phoenix School of Law, where he taught Sports Law from 2009-2010, and at Dominican University of California, where he taught courses in its Sports Management program from 2004-2007. He was also a grader for the California State Bar Examination.

Professor Jay is actively involved with several organizations. He is an Outreach Committee Regional Captain for the Sports Lawyers Association, on the Advisory Board for Arizona State University’s Sports Law & Business Program, and Secretary for the Association of Corporate Counsel’s Sports and Entertainment Network.  He is an Advisory Board Member for Big Brothers Big Sisters of Central Arizona, where he also serves as a Big Brother.