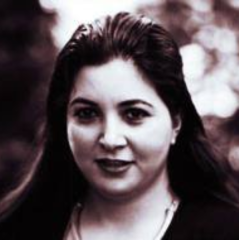 Miral Mahgoub al-Tahawy is an associate professor of Modern Arabic literature, an award-winning Egyptian novelist and short story writer, and an affiliated member of the Virginia G. Piper Center for Creative Writing at Arizona State University.

Mahgoub al-Tahawy was a Fulbright International Scholar at Columbia University, and was awarded a two-year postdoctoral research and teaching fellowship at New York University (NYU). She was also an international visiting scholar in the Department of Foreign Languages, Appalachian State University, Boone, NC; the Middlebury College Intensive Language Program, Middlebury VT; the Monterey Institute of International Studies, Monterey, CA; and the Department of Middle Eastern and South Asian Languages and Cultures (MESALC), University of Virginia, Charlottesville, VA. She earned her doctorate from Cairo University in Arabic language and literature.

Her focus is Contemporary Arabic literature on two distinct and related themes:

As a literary figure, Mahgoub al-Tahawy was named “One of the Most Influential Writers of the Oriental World” and "One of most powerful Middle Eastern writers" by Forbes magazine in 2014.

Mahgoub al-Tahawy has written four award-winning novels, each of which has garnered national and international recognition. Most are now taught around the world as part of standard curricula in Arabic literature in translation. Her literary work has now been translated into more than 15 languages.

Miral Mahgoub al-Tahawy has published  two scholarly books in Arabic. The first, "Muharramat, Qabaliah" (Tribal taboos: Aesthetics and the artistic formation of the Arabic desert novel; Beirut, 2008), explores implications of the image of the sacred pastoral landscape in the Arabic novel, the ways in which many Arabic novels represent it, and the symbolic forms that desert spaces take in embodying various cultures’ identities in Arabic writings.

The second, "Kitabet Al Mohramat Fi Al Riwayaa Al Arabia Al Nisaia" (Across the generations: Arab women and taboos in Arabic literature; Cairo/Beirut: Al Dar Al Masriah Al Lubnaniah [Egyptian Lebanese Publishing House], fall 2016), looks into the social polemics of receiving and accepting texts in the Arabic world, how these texts crisscross with religious, social, and political taboos, and the ensuing problems of censorship, banning, and confiscation. It offers an overview of major works in modern Arabic literature that have provoked confrontations with state power, with readers themselves, or with religiously motivated groups.

Mahgoub al-Tahawy has published nine refereed book chapters in English on contemporary Arab women’s writing within the contexts of social taboos, gender issues, women’s bodies and sexuality in modern Arabic literature, and the literary writing of ethnic minorities, including marginalized Arab groups such as the Bedouins and the Tuareg. Among these are:

“Reverence of the Beloved in Sufi Tradition: A Study of the Image of the Beloved in Arabic Women’s Writings.” In The Beloved in Middle East Literature: The Culture of Love and Languishing, ed. Alireza Korangy, Hanadi al-Samman, and Michael Beard. London: I. B. Tauris Publishing House, fall 2016.

“Timbuktu, the Legendary City and the Tuareg’s Legacy: A Study of the Novel Magi (Al -Majus) by the Libyan Writer Ibrahim Al-Koni.” In The City in Pre-Modern and Modern Arabic Literature, ed. Nizar Hermes and Gretchen Head. Edinburgh/London: The Centre for Visual Anthropology at Goldsmiths, fall 2016.

“Women’s Writing in the Land of Prohibitions: A Study of Alifa Rifaat and the Female Body Protest as a Tool for Rebellion.” In Gender and Sexuality in Muslim Cultures, ed. Gul Ozyegin. London: Ashgate Publishing House, 2015.

Her creative work include "Al-Khibaa" (The Tent), which came out in 1996. It focuses on women and Bedouin life in Egypt, and was selected as the best literary work in English translaton by the American University of Cairo. It became a bestseller. The novel was published in Arabic in more than six editions. The Tent was translated into English, French, Italian, German, Spanish, Swedish, Norwegian, Hindi, Urdu, Dutch, and 14 other languages.

"Al-Bazingana Al-Zarka’a" (Blue Aubergine) followed in 2000 and is about the 1980s Islamic uprising in Egypt. For this book, Mahgoub al-Tahawy won the Egyptian National Prize. She is the first female novelist to do so. Like The Tent, Blue Aubergine was translated into several foreign languages, including English, French, German, Danish, and Italian.

Miral’s third novel, "Nakarat El-Zeba’a" (Gazelle Tracks), is a historical novel about Bedouin families in Egypt at the beginning of the 19th century; it traces the changes in women’s lives through this time. Gazelle Tracks won Best Novel of the Year at the Cairo Book Fair and was translated into many languages.

Miral’s fourth novel, (Brooklyn Heights), released in Arabic 2010, is an intimate look at a woman’s sudden immersion into American culture. It was awarded the 2010 Naguib Mahfouz Medal for Literature at the American University in Cairo. The English translation of Brooklyn Heights, published in 2011 by Faber and Faber in the U.K., was chosen as the Best Translated Arabic book and was shortlisted for the “Arabic Booker” Prize, an international prize for Arabic fiction.

Miral al-Tahawy is an award-winning Egyptian novelist and short story writer, and an affiliated member of the Virginia G. Piper Center for Creative Writing at Arizona State University (ASU) in Tempe, AZ,