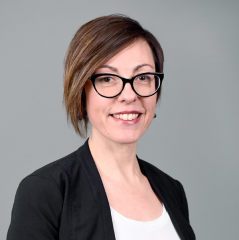 Sarah R. Graff is an Honors faculty fellow and affiliated faculty with the School of Human Evolution and Social Change at Arizona State University. She joined ASU in 2011. She directs Honors theses and teaches a variety of exciting courses such as The Human Event and History of Ideas, and courses in anthropology and archaeology.

Professor Graff is an anthropological archaeologist examining the relationship between the economy, cross-cultural exchange, and political authority during the establishment and decline of early states in the Middle East. Her research interests include formal and informal economies, craft production, technological change, cooking and food, trade and exchange, urbanism, material culture studies, and the intellectual history of economic anthropology. Methodologically she analyzes the production techniques used to make ceramic containers, their use and movement. She also analyzes archaeological evidence in context, spatial and environmental data, archival records, and material culture more broadly.

Professor's Graff’s current fieldwork is at the ancient Phrygian site of Kerkenes in the Yozgat Province of Central Turkey. Kerkenes was the largest city in Turkey when it was inhabited, between 620 and 550 BC. She has also been working at the ancient city of Al-Baleed in Salalah, Oman. During the late ancient and medieval times, Al-Baleed was a significant port city in the Indian Ocean. Previously, her field project was located in the Orontes River Valley of western Syria.

From 2006-2010, she was a Harper-Schmidt Fellow in the Society of Fellows and assistant professor in the social sciences at The University of Chicago. She held a Postdoctoral American Fellowship from the American Association of University Women (2010-2011).