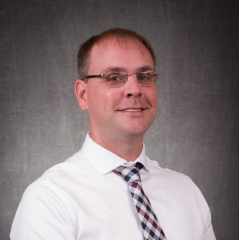 Ross Maciejewski is an associate professor at Arizona State University in the School of Computing, Informatics, and Decision Systems Engineering and director of the Center for Accelerating Operational Efficiency – a Department of Homeland Security Center of Excellence. His primary research interests are in the areas of geographical visualization and visual analytics focusing on homeland security, public health, dietary analysis, social media, criminal incident reports, and the food-energy-water nexus.  He has served on the organizing committees for the IEEE Conference on Visual Analytics Science and Technology and the IEEE/VGTC EuroVis Conference. Maciejewski is a recipient of an NSF CAREER Award (2014) and was recently named a Fulton Faculty Exemplar and Global Security Fellow at Arizona State. His work has been recognized through a variety of awards at the IEEE Visual Analytics Contest (2010, 2013, 2015) and a best paper award in EuroVis 2017.

For a complete list of publications, see my vita or visit vader.lab.asu.edu. Selected recent publications include:

For full details on all of my funded projects, please see my vita. A sample of ongoing funded research activity includes: