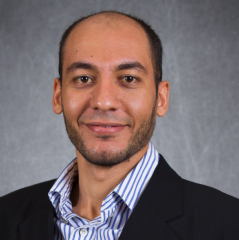 Ahmed Ewaisha was born in Cairo, Egypt in 1987. He received his bachelor's degree with honors in electrical engineering ranking top 5 percent in his class at Alexandria University in 2009. Consequently, he was admitted to Nile University that is considered the first research-based university in Egypt, where he received his master's degree in 2011 in electrical engineering, wireless communication. In Fall 2011 he was admitted to the electrical engineering doctoral program at Arizona State University (ASU). He finished his doctorate in Dec. 2016. His dissertation title was "Power Allocation and Scheduling of Real-Time Data for Cognitive Radios." He also pursued his postdoctoral studies at ASU.

Ewaisha is a lecturer in the School of Electrical, Computer and Energy Engineering at ASU. His main research interests fall in the broad area of wireless communications and networking with a focus on developing algorithms to guarantee acceptable quality-of-service for real-time applications such as audio and video data.