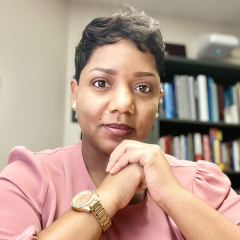 Joyce McCall was appointed to the faculty at Arizona State University in 2021 where she teaches undergraduate and graduate courses in the School of Music, Dance, and Theatre. Prior to her appointment, she served as an assistant professor of music education at the University of Illinois at Urbana-Champaign. In 2015 to 2018, she served as a postdoctoral resident scholar and visiting assistant professor in music education at the Indiana University Jacobs School of Music.

McCall earned a Ph.D. in Music Education from Arizona State University, and a Master of Music Education and Bachelor of Music in Clarinet Performance from The University of Southern Mississippi. Her research—positioned within the context of frameworks like critical race theory and double consciousness theory—centers on how race, class, and culture impact educational equity in music education. Additionally, she examines how certain pedagogies such as culturally relevant teaching influences learning outcomes among minoritized racial populations in the music classroom. She has presented sessions and research at the American Educators Research Association, the College Music Society, the Midwest Band and Orchestra Clinic, the National Association for Music Education, and the Society for Music Teacher Education, and published articles in the Journal of Music Teacher Education, the Desert Skies Symposium on Research in Music Education, and the Pennsylvania Music Educators Association News. Her latest book chapter, "Speak No Evil: Talking Race as an African American in Music Education," has served as a critical tool in music toward empowering scholars of color and inspiring anti-racist work.

McCall has proudly served as a clarinetist and saxophonist in the United States Army Bands from 1999 to 2013. During her service, she was awarded the Army Achievement Medal, the National Defense Service Medal, and the Global War on Terrorism Service Medal. Previous assignments include the 151st Army Band in Montgomery, Alabama; the 41st Army Band in Jackson, Mississippi; the 36th Infantry Division Band in Austin, Texas; and the 108th Army Band in Phoenix, Arizona. She is a member of Sigma Alpha Iota International Music Fraternity for Women and Delta Sigma Theta Sorotity, Incorporated.

McCall, J. M. (in print 2021). “Straight, No Chaser:” An Unsung Blues. Invited as a contributing author by editors Adrienne D. Dixson and Marvin Lynn in the Handbook of Critical Race Theory. Routledge.