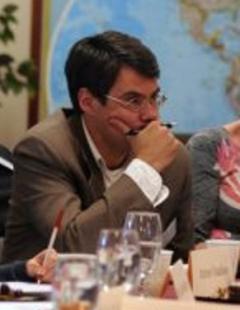 Chad Haines is a cultural anthropologist whose interests intersect across a spectrum of humanistic concerns for marginal communities and building sustainable global futures founded in values of peace, community wellbeing, and lived ethics. As a convert to Islam, Haines stradles multiple worlds, interweaving diverse perspectives and experiences into his scholarship and teaching. He is a recognized scholar of modernity and Islam, Pakistan and South Asia, urbanism and belonging, as well as peace studies.

Haines is the author of Nation, Territory, and Globalization in Pakistan (Routledge 2012) and co-editor of three books on peace:  Women and Peace in the Islamic World: Gender, Agency, and Influence (I.B. Taurus 2015), People’s Peace: Prospects for a Human Future (Syracuse University Press 2019) and Peace and the Other: Challenges of the 21st Century (forthcoming). He is completing a second book monography, tentatively titled Muslim Pathways: Modernity, Informality and Everyday Ethics in the Alleys of Cairo, Islamabad, and Dubai (forthcoming). He has published a number of articles in leading journals and contributed chapters to several edited volumes. He serves on the advisory board of a number of international academic journals.

At ASU, Haines is an affiliated faculty with the Center for the Study of Religion and Conflict and the Center on the Future of War and is a Senior Sustainability Scholar with the Julie Ann Wrigley Global Institute of Sustainability. He is the coordinator of ASU’s Islamic Studies and Research Association and a regular contributor to the peace studies initiative. Before joining ASU, Haines was an assistant professor at American University in Cairo and worked at the University of North Carolina at Chapel Hill as well as lectured at a number of other universities.

Haines's current research projects include: Islamophobia and hate where he has interviewed members of American extremist groups including the Oath Keepers and 3 Percenters; minority belonging in South Asia where he is conducting research on communities who are mapped outside the nation-states of Pakistan, India, and Bangladesh; and reimagining peace as an everyday, lived ethics of community building.

Muslim Modernities: Urban Planning, Informality, and Religion in Cairo, Islamabad, and Dubai interweaves his earlier interests in the spatial history of margins and Islam. The work 1) analyzes the diverse forces of modernity that reshape the cities of Cairo, Islamabad, and Dubai; 2) map out the urban public spaces in these cities and how they are usurped by users; and, 3) reflects on how informality and dialogue transgress normative ideas of modernity professed by liberalism and Islamism, creating new sites and ways of being Muslim in the modern world.

People's Peace: Humanistic Perspectives is a multi-tiered project shedding light on the diverse ways people perform peace, respect, and appreciation for difference in their everyday lives. The project includes a forthcoming edited volume of chapters by leading US-based peace scholars, a series of workshops for junior faculty in Pakistan on conceiving research projects on peace and teaching peace in the classroom, and a faculty research and reading seminar at ASU.

“Being Muslim, Being Cosmopolitan: Transgressing the Liberal Global,” Journal of International and Global Studies 7:1 (2015), pp. 32-49.

“Cracks in the Façade: Landscapes of Hope and Desire in Dubai,” in Worlding Cities: Asian Experiments and the Art of Being Global. Ananya Roy and Aihwa Ong, editors. London: Blackwell, 2011.