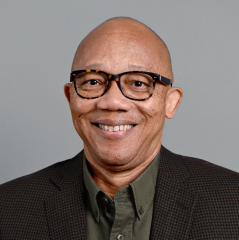 Andrew E. Barnes grew up in Saint Louis, Mo. He attended Wesleyan University in Connecticut where he graduated cum laude with a degree in history in 1975. He studied for his doctorate at Princeton University in New Jersey.  He defended his doctoral thesis on Christian lay devotional life in early modern France in 1983. He taught and received tenure at Carnegie Mellon University in Pittsburgh, Pennsylvania. He left Carnegie Mellon for his present position in the history department at Arizona State University in 1996. He was promoted to professor of history in 2016. Barnes is the author of three monographs: "The Social Dimension of Piety: Associative Life and Religious Change in the Penitent Confraternities of Marseille 1499-1792" (Paulist Press, 1994); "Making Headway: The Introduction of Western Civilization in Colonial Northern Nigeria" (University of Rochester Press, 2009); "Global Christianity and the Black Atlantic: Tuskegee, Colonialism and the Shaping of African Industrial Education," (Baylor University Press, 2017), as well as more than 30 research journal articles and scholarly book chapters. He is presently working on a study of the Phelps Stokes Education Commissions and their impact in Africa during the era of European colonialism.

Barnes teaches courses on African and European history with a focus on the history of Christianity. His undergraduate course offerings include HST 101: Introduction to Global History since 1500; HST 352: Europe's Reformations; HST 361: Witchcraft and Heresy in Pre-Modern Europe. Barnes was a pioneer in online instruction, offering his first internet course in 1999. More recently he has focused on the development of internet courses for the online master's degree program.