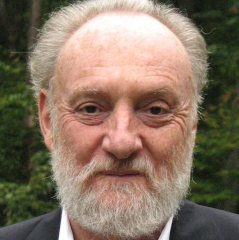 Professor of Culture, Values and Emerging Technologies Emeritus, Office of the President

Founding Co-Director, "The Guide Project:  How to Design the Future"

Joel Garreau, who joined Arizona State University in 2010, is an explorer of culture, values and change. To aid those who follow later, he frequently publishes mental maps. Professor Garreau most recently is the author of "Radical Evolution: The Promise and Peril of Enhancing Our Minds, Our Bodies, and What It Means to Be Human" – a look at the hinge in history at which we have arrived. The genetic, robotic, information and nanotechnology revolutions are changing what it means to be human – modifying people’s minds, memories, metabolisms, personalities and progeny – not in some distant science fiction future but right now, on our watch. All the projects Garreau has launched at ASU build upon a "Radical Evolution" concept that the Prevail Scenario – the humanistic possibility that we can control and direct this future – might be encouraged. The idea is that if the Defense Advanced Research Projects Agency (DARPA) can accelerate the technological future into being, perhaps the same can be done to accelerate the coming together of those striving in novel, audacious ways to imagine -- and then create -- a human future in which we can thrive.

Professor Garreau, a former long-time reporter and editor at The Washington Post, is also the author of "Edge City: Life on the New Frontier," and "The Nine Nations of North America."  He has served as a scenario-planner with Global Business Network, and is principal of The Garreau Group – a network of sources committed to understanding who we are, how we got that way, and where we’re headed.