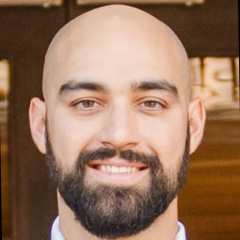 Michael Markos is an Associate Attorney based in the Tempe office of LegalForce RAPC Worldwide. Michael works with small to medium-sized businesses in the fields of business law and intellectual property. He received his Juris Doctorate from the Sandra Day O’Connor College of Law at Arizona State University in May 2017. In addition, Michael was a recipient of the 2017 Dean’s award for academic and non-academic excellence.

Prior to joining LegalForce RAPC Worldwide, Michael had legal internships with United States Attorney’s Office, Arizona Attorney General’s Office, Starwood Hotels and Resorts Worldwide, Inc., and a number of local Arizona law firms. Most notably, Michael worked as a judicial intern for Senior Judge Susan R. Bolton of the United States District Court for the District of Arizona. Before enrolling in law school, he earned two Bachelor of Arts degrees from Arizona State University, in Global Politics and Business Law. In his free time, Michael continues to train and instruct taekwondo students while maintaining his rank as a 5th degree black belt.