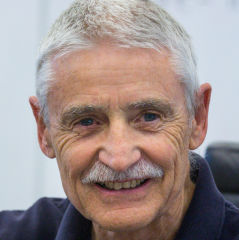 Leland Hartwell led a research team at the Department of Genetics, University of Washington using cell biology and genetics to investigate how yeast cells divide from 1968 to 1997. They discovered two cellular pathways that are integrated by an overall control point regulating cell division and a signaling pathway that arrests cell division in response to DNA damage.

From 1997-2010, he was president and director of the Fred Hutchinson Cancer Research Center. During that period the FHCRC completed its expansion and consolidation to the South Lake Union campus and formed the Seattle Cancer Care Alliance in partnership with the University of Washing and Seattle Children’s Hospital. He advised the the National Cancer Institute in the creation the NCI CPTAC proteomics program and organized an international cancer proteomics consortium devoted to the early detection of cancer.

He joined the faculty of the Arizona State University in 2010. He is the Virginia G. Piper Chair of Personalized Medicine, with appointments in the Mary Lou Fulton Teachers College, Ira A. Fulton Schools of Engineering, and School of Sustainability. He is the director of the Biodesign Pathfinder Center and leads a small team that developed and teaches a course, Sustainability Science for all pre-service K-8 Teachers.He also heads the HoneyBee program at ASU overseeing a series of small clinical trials using wearable devices to monitor physiological parameters in clinical patients for a variety of diseases.

He also has an appointment as Distinguished Faculty at Chang Gung University and Hospital system in Taiwan where he advises a Biosignatures Program seeking to discover biomarkers in oral cancer, colon cancer and other diseases and to implement wearable devices in clinical management.

Professor Hartwell is a member of the National Academy of Sciences and he received the 2001 Nobel Prize in Physiology or Medicine. Other honors include the Albert Lasker Basic Medical Research Award, the Gairdner Foundation International Award, the Alfred P. Sloan Award in cancer research, and the Genetics Society Medal of Honor.