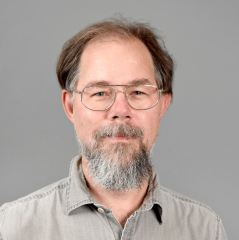 Jay Taylor is an evolutionary biologist who uses a combination of stochastic modeling, statistical analysis and genetic sequence data to understand how populations and communities evolve in complex and changing environments. Although trained as a theoretical population geneticist, in recent years, Professor Taylor has increasingly focused on the natural history of soil mites in the Sonoran desert and Madrean sky islands. Whereas the plants, insects and vertebrates of this region have been intensively studied, relatively little is known about the acarofauna. Consequently, one of the major aims of work being carried out by Professor Taylor and his students is to characterize the biodiversity of soil mites found within the region and then use these systems to explore questions in population genetics and evolutionary ecology. In addition, the lab studies the diversity and epidemiology of myrmecophilous mites. This work includes both a broad survey of ant-mite interactions within the region, as well as a more focused study of mites associated with two species of seed harvester ants, Novomessor cockerelli and N. albisetosus.

Professor Taylor is also interested in the evolution of parasites that cause chronic infectious diseases such as malaria (Plasmodium spp.) and African sleeping sickness (Trypanosoma brucei). These organisms have evolved elaborate strategies such as antigenic variation which allow them to survive despite being targeted by their hosts' immune systems. In some parasites, such as T. brucei, antigenic variation is achieved with the help of large multigene families that include numerous pseudogenes. However, because these pseudogenes contribute to antigenic diversity through segmental gene conversion, they are likely subject to natural selection. Current work in the Taylor lab is concerned with understanding the dynamics of pseudogene formation in antigen repertoires using both multiscale mathematical models and analysis of parasite genomes.

1. Natural history, population genetics and ecology of soil and myrmecophilous mites in the Sonoran desert and Madrean sky islands.