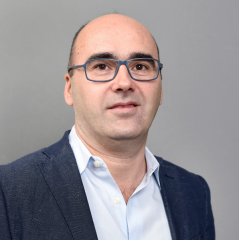 Simone Mancuso, percussionist and conductor specialized in contemporary music, has been internationally recognized for his interpretations of contemporary classical pieces. His prizes include the Kranichstein-Stipendienpreise from the Internationales Musikinstitut Darmstadt in 2002 and the First Prize from the Stockhausen Stiftung für Musik in 2005, which was awarded to Mancuso directly by Karlheinz Stockhausen. In 2007, Karlheinz Stockhausen selected him as a recommended performer of his works.

His career as a percussionist has taken him throughout Japan, Russia, Brazil, Germany, France, Italy, the Netherlands, Switzerland and the United States. He has performed in such prestigious venues and festivals as the Kennedy Center, Blues Alley, Strathmore Hall, Martha Argerich Project, PASIC, among others.

As a soloist, he has appeared with the Basel Sinfonietta, Orchestra della Svizzera Italiana, SONUS Ensemble, and Orchestra da Camera Ungherese under the baton of Alexander Rabinovitch-Barakovsky, Johannes Kalitzke, Giorgio Bernasconi, Denise Fedeli, and Diego Fasolis.

He is the founding member of the Swiss-based Lugano Percussion Group, the jazz/ classical crossover duo Mancuso-Suzda Project, and the Sonus Duo with renowned saxophonist Timothy McAllister. Since 2009 he has collaborated with the Phoenix-based ensemble, Crossing 32nd Street.

As a conductor, he has collaborated with soloists such as Dora Schwarzberg, Alexander Gurning, Jorge Bosso, Nora Romanoff. He recently toured with his New York based trio Ensemble-Nomade where he conducted Stravinsky Histoire du Soldat at the Martha Argerich Festivals in Japan and Switzerland. For this project Ensemble Nomade was paired with the members of the Tokyo Symphony Orchestra, Saito Kinen Orchestra, Tokyo University (Japan) and the Orchestra della Svizzera Italiana.