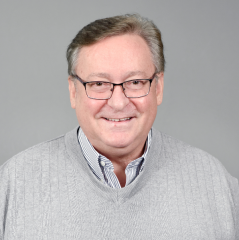 Russell Ryan was born in North Dakota, USA, and received his first piano lessons at the age of six. He performed as a soloist at the San Francisco Junior Bach Festival for four consecutive years. After his studies at the San Francisco Conservatory of Music with Paul Hersh, he participated in masterclasses at the Juilliard School in New York, and subsequently moved to Austria, where he studied piano chamber music under Professor Georg Ebert at Vienna’s University for Music and the Performing Arts, graduating with honors. During his piano studies, he has worked with Irwin Freundlich,  Adele Marcus, Thomas Schumacher, and Ingrid Haebler.

In 1985, he became a member of staff of the vocal department at Vienna’s University for Music and Performing Arts, where, as of 1991, he worked as assistant in the lied-class of Edith Mathis. For several years he was also accompanist of the Wiener Singverein and frequently gave master classes for opera and musical theatre at international festivals, such as the Jugendfestival Bayreuth, the Wiener Meisterkurse, the Gino Bechi Festival in Florence and the Oslo Music Academy. In 2008, he received a professorship of practice for collaborative piano at Arizona State University and is guest instructor at the Institute for the International Education of Students (IES) in Vienna, where he is in charge of the Vocal Performance Class. He also has been a guest artist at the Fairbanks Summer Arts Festival and Middlebury Summer program.

He performs regularly as a soloist and collaborative artist throughout Europe, the USA, Israel, Japan, and China. He has appeared in many radio and television broadcasts and has recorded several CDs, including the most recent recording of Schulhoff’s Concerto Doppio with Ulrike Anton and David Parry with the English Chamber Orchestra. Through the years, he has concertized extensively with the Austrian baritone,Wolfgang Holzmair, with whom he has recorded the Mahler Lieder cycles, Hugo Wolf, Schubert and Krenek, Music from Theresianstadt, and many live radio broadcasts. Chamber Music CDs include the Complete Flute Trios of J. Haydn, Austrian Flute Music through the Centuries (Zeitsprünge), and  works by Hans Gal with the Austrian Flutist, Ulrike Anton.  Mr. Ryan has concertized at the Wiener Festwochen, Wigmore Hall, the Concertgebouw, the Menuhin Festival Gstaad, the Grieg Festival Oslo, Bergenser Festspillene, the Wiener Musikverein, Wiener Konzerthaus,  the Lincoln and Kennedy Center Series, the Berlin Konzerthaus and the Schleswig-Holstein Musikfestival in Germany, to mention only but a few venues. In addition, he performed in the Weill Recital Hall at New York's Carnegie Hall, accompanying Hugo Wolf’s major song-cycles on several evenings.