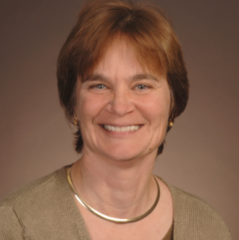 Deborah Clarke is the vice provost for academic personnel in the University Provost's Office and professor in ASU's Department of English. She joined the ASU in 2008, after spending 20 years at Penn State University. Her primary field is twentieth century American fiction, with particular emphasis on Faulkner and women writers. In her first book, "Robbing the Mother: Women in Faulkner," she explored the ways in which Faulkner's women characters reflect a tension between the body and language, between the literal and figurative, and how that tension characterizes her creative vision. Her second book, "Driving Women: Fiction and Automobile Culture in Twentieth-Century America," deals with women and cars. It examines the intersection of American fiction— primarily but not exclusively by women—and automobile culture, arguing that issues critical to 20th century American society—technology, mobility, domesticity, and agency—are repeatedly articulated through women's relationships with cars.

Clarke is currently working on a book on modernist domesticity, exploring the ways that the domestic sphere--often associated with 19th rather than 20th century fiction and as a site of stability--functions rather as destabilizing and dislocating force in modern fiction.  Her work has been supported by the NEH and the Penn State Institute for the Arts and Humanities, and has served as a Beatrice Bain Research Fellow at University of Californnia at Berkeley. She is honored to have received teaching and advising awards throughout her career.