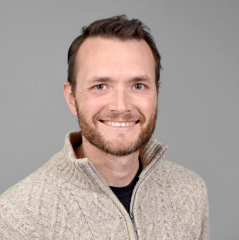 Erich Fisher is a Research Scientist at in the School of Human Evolution and Social Change at Arizona State University. He is interested in the origins of modern humans and archaeoinformatic methodologies to analyze and archive archaeological sites and assemblages.

Erich has field experience across the Horn of Africa, East Africa, South Africa, Arabia, and Mesoamerica, and he currently collaborates on six international research projects. Erich joined ASU in 2008 after finishing his Fulbright-sponsored Ph.D. research on stone tool technological change in southern Ethiopia. He received his Ph.D. from the University of Florida in 2010 and has since held Post-Doctoral and Faculty research positions at ASU.

Erich has field experience across the Horn of Africa, East Africa, South Africa, Arabia, and Mesoamerica, and he currently collaborates on six international research projects. Currently, Erich is a senior researcher for the SACP4 project, which is led by Dr. Curtis Marean (ASU), and focuses on the origins of modern humans on the south coast of South Africa.  His research for the SACP4 project focuses broadly on the origins and evolution of modern humans in Africa, but his specific interests lay in methodological and analytical questions dealing largely with digital and geospatial technologies.

In 2007, Erich was a co-author of the study published in Nature describing the earliest evidence of coastal foraging by humans 167,000 years ago.  His reconstruction of the South African coastline at 167,000 years ago have also laid the foundation for a much larger, and now well-cited, geospatial study that was published in Quaternary Science Reviews, which modeled the evolution of the South African coastline over the past 430,000 years.

More recently, Erich was a co-author on another study in Nature describing the earliest evidence for microlithic technology 71,000 years ago, which is largely seen to herald the innovation of true projectile weaponry.  Erich’s artwork was chosen as the cover image for that edition of Nature (November 22, 2012).

Lastly, Erich is also the principle investigator of the P5 project, which is studying the origins of coastal foraging on South Africa’s eastern seaboard.  In 2011, he led the first ever reconnaissance for Pleistocene archaeology in the remote Pondoland region of South Africa with funding from the National Geographic Society and Waitt Foundation.