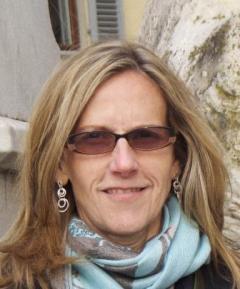 Patricia J. Huntington is a professor of philosophy and religious studies in the School of Humanities, Arts and Cultural Studies in Arizona State University's New College of Interdisciplinary Arts and Sciences.

At ASU West, Huntington has been the visionary behind the development of the Certificate in Philosophy, Rhetoric, and Literature (PRL). It offers a streamlined 15 credit transdisiciplinary focus for undergraduates who wish to develop their critical and imaginative thinking about philosophy, culture, and communication.  Additionally, there is an area focus in PRL for students in the Masters in Interdisciplinary Arts Studies (MAIS).

Huntington graduated from Fordham University in 1994 with a doctorate in philosophy after receiving her master's degree in the same subject from Fordham in 1988. She received her bachelor's degree in comparative religion from San Diego State University in 1984. Well travelled, Huntington also studied philosophy at J. W. Goethe Universität in Frankfurt, Germany, attended the Volkshochschule German Language School in Frankfurt as well as the Sorbonne's French Language Institute in Paris, France. During her teen years, she studied at John F. Kennedy, a bilingual school in Jurica, Mexico.

Before joining the faculty at ASU in 2008, Huntington taught philosophy in a thriving liberal arts atomosphere for 11 years at Loyola University of Chicago (1998-2007).  She also played a role in the education of the Jesuit scholastics through the First Studies Program at Loyola. Prior to Loyola, she taught at American University (1996-98) and Moravian College (1994-95).

In addition to her faculty appointment in New College, Huntington is a faculty affiliate with the School of Historical, Philosophical and Religious Studies in ASU's College of Liberal Arts and Sciences at the Tempe campus.

She is currently Book Review Editor, Frontiers of Philosophy in China 中国哲学前沿 and a member of the editorial board at Hypatia : A Journal of Feminist Philosophy. Huntington has authored "Ecstatic Subjects, Utopia, and Recognition: Kristeva, Heidegger, Irigaray," co-edited "Feminist Interpretations of Martin Heidegger" and co-edited a book series, "New Critical Theory," which published 16 leading as well as novel authors in the emerging transdisciplinary field of critical theory.

In her monograph, "Loneliness and Lament: A Phenomenology of Receptivity," Huntington shows that loneliness does not consist essentially in the absence of a friend, partner, spouse or child but stems, rather, from a radical breach in one's relation to life journey.

“A Huayan Critique of Heidegger: The Quest for a Non-Obstructed Mitdasein.” Journal of the Pacific Association for the Continental Tradition, Vol. 1 (2018): 1-18.

"The Aesthetics of Learning to Be Human." The Society for Asian and Comparative Philosophy.  he World Congress of Philosophy.  Beijing, August 19, 2018.

“The Time of Awakening: Dogen and Yogacara,” presentation to Division of Humanities, Hong Kong University of Science and Technology, March 22, 2016.

“The Time of Karmic Transmission: Aspects of Dógen and Yogácára,” presentation at the Continental and Comparative Philosophy Circle (CCPC), Co-sponsored by the Institute of Philosophy, University of Iceland, Reykjavik, Iceland, May 14-17, 2015.

Paper presentation,  "Mending: The Hard Work of Repair in a Broken World."  SPEP or Society for Phenomenology and Existential Philosophy, Philadelphia, Oct 21-23.

Huntington P.  (2010). “On Witnessing and Love: A Dialogue with Caputo.”  A Postmodern Phenomenology of the Cross, eds. Mark Zlomslic and Neal DeRoo. Postmodern Ethics Series (Wipf and Stock Publishers), 197-223.

Huntington, P.J. (2006). "Loneliness and innocence: A Kierkegaardian reflection on the paradox of self-realization." Continental Philosophy Review, 39, 415-433.