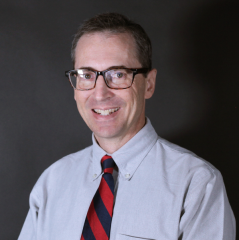 Mike Tueller received his bachelor's from Harvard University in 1992 and, after a brief stint in the U.S. Navy, completed Harvard's doctoral program in classical philology in 2003. He taught for five years at Brigham Young University; in 2008 he came to ASU, where he teaches courses in ancient Greek language and literature.

I work primarily in the Hellenistic period, the time after Alexander the Great but before Augustus, when Greek language and culture spread broadly across the Mediterranean. At that time, the Greek people had to deal with their own discontinuity in space and time from their heritage, and with their constant contact with very different peoples. In response, their literature became erudite, allusive, and, strangely, both nostalgic and cosmopolitan (sometimes at once).

My usual focus within this period is epigram. Epigrams began as inscriptions on objects--usually gravestones or objects dedicated in temples--but soon became short poems that often featured witty turns of phrase or thought (hence the modern meaning of the term "epigram"). My research focuses on the ways that early Hellenistic epigrams played with the conceit of inscription, even when they were never meant to be inscribed.

I am currently at work on a revision of the Greek Anthology (our primary source for Hellenistic epigram) for the Loeb Classical Library.