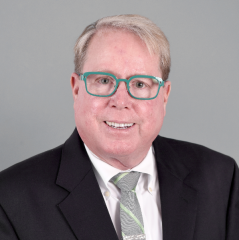 Craig D. Thatcher is a senior associate dean and professor in the Edson College of Nursing and Health Innovation at Arizona State University. He received his MS, DVM and PhD (Nutritional Physiology) from Iowa State University. He is a Diplomate of the American College of Veterinary Nutrition. After graduation, he spent several years in private mixed-animal practice in north central Pennsylvania.

Professor Thatcher's research interest is in the area of comparative nutrition and the role of antioxidant nutrients in health and disease, particularly as it relates to obesity and insulin resistance. He was co-director of a multidisciplinary $3.25M NSF-IGERT award titled “Macromolecular Interfaces with Life Sciences: Oxidative Processes” at Virginia Tech. He has mentored more than 30 graduate students and postdoctoral fellows, has been awarded research funding from a variety of sources during his career, and has published more than 125 peer-reviewed papers. He has been a frequent invited speaker at national and international professional conferences. He has co-authored and co-edited the textbook, "Small Animal Clinical Nutrition," which is the most widely used textbook to teach small animal clinical nutrition to practitioners and veterinary students worldwide.

His research has focused on using animal models to study important human and animal diseases, specifically the role that nutrition plays in disease processes. He has been involved in both basic and translational research and funding for his work has been from various sources including federal agencies, industry, and private foundations. Most recently, his research has focused on oxidative processes as it relates to obesity and asthma using an equine model.

For a current list of publications and research activity visit experts.asu.edu.