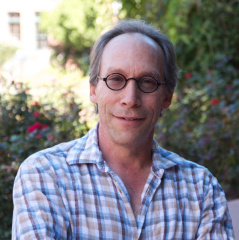 Lawrence Krauss directed The Origins Project at Arizona State University and was a professor at ASU’s School of Earth and Space Exploration and Department of Physics. He retired from ASU in May 2019. He is now the host of The Origins Podcast and president of The Origins Foundation, established in 2018.

Krauss is an internationally known theoretical physicist with wide research interests, including the interface between elementary particle physics and cosmology, focusing on the origin and evolution of the Universe and the fundamental structure of matter. He has written more than 300 scientific publications and 10 popular books, including the international best-sellers, "The Physics of Star Trek," and "A Universe from Nothing." His latest book, "The Greatest Story Ever Told--So Far" was released in 2017. He writes regularly for magazines and newspapers, including the New York Times and the New Yorker, and frequently appears on radio and television, as well as, most recently, in several feature films. Among his numerous awards are included the highest awards from all three U.S. physics societies and the 2012 Public Service Award from the National Science Board.

How to Turn Back the Clock, The Bulletin of the Atomic Scientists, Jan 2010.

The Use of Nuclear Weapons Against a Civilian Population, in This Will Change Everything, ed J. Brockman, Harper Perennial, Dec 2009.

The Big Bang, Modern Cosmology and the Fate of the Universe: Impacts upon Culture, The Role of Astronomy in Society and Culture Jan 2009, IAU Proceedings, D. Valls-Gaubaud and A. Boksenberg, eds, arxiv: 1002.1952.

The Gulf Spill and the Limits of Science, The Wall Street Journal, June 11, 2010.

The Lies of Science Writing, The Wall Street Journal, December 4, 2010.

Glenn Beck and the science of crowd counts, The Los Angeles Times, Sept 5, 2010.

From One Physicist to Another: Lawrence Krauss Reflects on the Life and Work of Richard Feynman, Scientific American Guest Blog, March 2011.

The space shuttle programme has been a multi-billion-dollar failure, The Guardian, July 21, 2011.

The Shuttle Was a Dud But Space Is Still Our Destiny, The Wall Street Journal, July 22, 2011.

A Quantum Life, The Chronicle of Higher Education, August 20, 2011.

Voyager Heads for the Stars, The Wall Street Journal, December 10, 2011.

The Hunting of the Higgs: what is it and why does it matter?, Richard Dawkins Foundation for Science and Reason, December 12, 2011.

The faithful must learn to respect those who question their beliefs, The Guardian, February 07, 2012.

Why we need college degrees more than we need faith, The Washington Post, February 28, 2012.

Why Are Religious Beliefs Off Limits?, The Huffington Post, March 05, 2012.

Does Conservatism Have to Be Synonymous With Ignorance, The Huffington Post, March 14, 2012.

A Universe Without Purpose, The Los Angeles Times, April 1, 2012.

Did the Universe Arise from Nothing?, World Science Festival Blog, May 10, 2012.

Does Religious Liberty Equal Freedom to Discriminate?, Richard Dawkins Foundation for Science and Reason, May 28, 2012.

How the Higgs Boson Posits a New Story of our Creation, Newsweek Magazine, July 09, 2012.

Romney: Grounded in the Galaxy?, Richard Dawkins Foundation for Science and Reason, August 23, 2012.

Philosophy v science: which can answer the big questions of life?, The Guardian, September 08, 2012.

Whose Space-Exploration Policy Is Better—Obama’s or Romney’s?, Slate Magazine, October 04, 2012.

Mormonism in the Mainstream? Richard Dawkins Foundation for Science and Reason, October 23, 2012.

An open letter to President Obama: The time on the Doomsday Clock is five minutes to midnight, The Bulletin of the Atomic Scientists, January 14, 2013.

A Guide to Understanding Nothing, Big Think, February 6, 2013.

Are We All Martians?  How Recent Discoveries Raise the Possibility, The Daily Beast, March 23, 2013.

A Tweeting Pope Raises Questions about Social Media's Effect on the Church, The Daily Beast, September 20, 2013.

What Does the Future of the Universe Hold?, Smithsonian Magazine, December 16, 2013.

Five minutes is too close, Bulletin of the Atomic Scientists, January 13, 2014.

Why the One Appealing Part of Creationism is Wrong, The New Yorker, February 19, 2014.

Why Hollywood Thinks Atheism is Bad for Business, The New Yorker, March 5, 2014.

A Scientific Breakthrough Lets Us See to the Beginning of Time, The New Yorker, March 17, 2014.

I have No Idea How I Ended Up in that Stupid Geocentrism Documentary, Slate, April 8, 2014.

Science Funding is a National Investment - Not an Expense, The Conversation, June 9, 2014.

Climate Change: If we pretend it isn’t happening, will it go away?, Bulletin of the Atomic Scientists, July 23, 2014.

Scientists as celebrities: Bad for science or good for society?, Bulletin of the Atomic Scientists, January 10, 2015.

All Scientists Should Be Militant Atheists, The New Yorker, September 8, 2015.

The Trouble with Theories of Everything, Nautilus, October 1, 2015.

70 years of speaking knowledge to power, Bulletin of the Atomic Scientists, November 24, 2015.

Why the Humanist Magazine Matters, The Humanist, December 22, 2015.

How a Celebrity’s Silly Belief in Flat Earth Can Be Useful, Slate, January 29, 2016.

Finding Beauty in the Darkness, The New York Times, February 12, 2016.

The Fantasy of the Deathbed Conversion, The New Yorker, July 6, 2016.

How Much More Can We Learn About the Universe, Nautilus, September 1, 2016.

Thanks to Trump, the Doomsday Clock Advances Towards Midnight, with David Titley, The New York Times, January 26, 2017.

Why the Trump Immigration Ban is Bad for the U.S. and Bad for the World, Scientific American Blog, January 30, 2017.

A Brief History of the Grand Unified Theory of Physics, Nautilus, March 16, 2017.

Damn the federal torpedoes, full speed ahead, Bulletin of the Atomic Scientists, June 2, 2017

Pondering Voyagers’ Interstellar Journeys, and Our Own, The New York Times, September 5, 2017

The World Needs a Terrestrial Sputnik Moment, The Atlantic, October 4, 2017

2000, Award for Public Understanding of Science and Technology, American Association for the Advancement of Science.   Citation: For global impact as a science communicator and the ability to maintain an active science career while writing several books about physics for the general public.

2001, Julius Edgar Lilienfeld Prize, American Physical Society.   Citation: For outstanding contributions to the understanding of the early universe, and extraordinary achievement in communicating the essence of physical science to the general public.

2001, Andrew R. Gemant Award, American Institute of Physics.  Citation: To Professor Lawrence Krauss for excellence in the interpretation of physics to the public through numerous newspaper and magazine articles, books, lectures, and television productions.  Krauss is especially commended for his communication of sound scientific literacy through timely opinion pieces and books, and for his efforts to address incorrect popular interpretations of science disseminated in the mass media.

2002, American Institute of Physics Science Writing Award for Atom, An Odyssey from the Big Bang to Life on Earth and Beyond

2005, Joseph A. Burton Forum Award, American Physical Society, Citation: For major contributions in defending science in the schools through his efforts in combating the opponents of teaching evolution, and for continuing to enhance the public understanding of contemporary physics

2009, Center for Inquiry World Congress Award for Scholarship in the Public Interest.