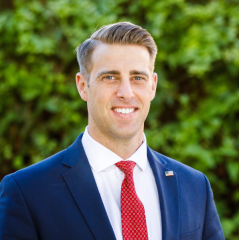 Drew Trojanowski is Assistant Vice President, Strategic Initiatives, for Arizona State University's Knowledge Enterprise.  In this capacity, he is responsible for helping to develop a dynamic capacity at ASU to accelerate technology and create an agile workforce for national security that can be used to enhance regional and local economies.

Prior to joining ASU, Trojanowski was a Presidentially Commissioned Officer on the White House Domestic Policy Council (DPC) and Special Assistant to the President (SAP).  In these roles, he oversaw the departments of Veteran Affairs, Defense, Labor and NASA.  During his tenure, Trojanowski was the policy lead on three executive orders and 56 regulations, including the MISSION Act and the PREVENTS Initiative.  Before joining the White House in 2018, he served two years as the Military Legislative Assistant to U.S. Senator John McCain, Chairman of the Senate Armed Services Committee.

Trojanowski is a career public servant.  He began as a scout/sniper in the U.S. Army, deploying to both Iraq and Afghanistan, serving our nation's military for a decade.  He was also an overseas combat advisor to a foreign military in the realms of personnel, intelligence, civil affairs and operations.  After transitioning to the Arizona National Guard, he developed long-range plans for the Joint Counter Narco-Terrorism Task Force, including budget and staffing requirements, as well as implemented statewide training programs and policies.

Following his active military service, in 2015, Trojanowski joined the Mesa Chamber of Commerce, where he facilitated the creation of the Mesa Industry and Defense Council (MIDC), a consortium of more than 70 defense and aerospace companies, as welll as created a nationally recognized statewide workforce development pipeline.  He left the Mesa Chamber to work for Senator John McCain as staff lead on all defense and veteran's issues.  During Trojanowski's tenure with Senator McCain, he oversaw Arizona defense priorities for the annual National Defense Authorization Act (NDAA) and penned several successful pieces of legislation, including crafting and advancing the MISSION Act - a new law that transforms the VA into a high-performing and integrated 21st century healthcare system.

Trojanowski holds a bachelor's degree in Sustainability from Arizona State University, is a graduate of the Flinn-Brown Civic Leadership Academy, and is currently attending the Naval War College in pursuit of an MA in National Security Studies.  On the personal side, Trojanowski established a non-profit urban farm called Mesa Urban Garden immediately following his return from his last deployment.  His hobbies include volunteering, camping and traveling.