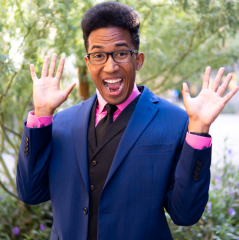 Isaac Easley is an instructor in video journalism and innovation. He teaches broadcast classes, produces promotional videos for the school and works with students in Cronkite News on the Local TV News Innovation project under a Knight Foundation grant.

Before joining the Cronkite School, Easley was a content producer for the Phoenix Suns, the Phoenix Mercury and the Arizona Rattlers for six years. As a producer, he helped produce intro videos, corporate videos, commercial videos, marketing videos, community videos and videos for social media. He also has experience in storyboarding, directing, filming, and editing. In 2020, he won a Rocky Mountain Emmy for the Phoenix Suns intro campaign. He was previously twice-nominated for directing. In the summer of 2021 he won a Telly Award for his video on New York Times executive editor Dean Baquet.

Easley, an alum of the Cronkite School, delivered the student convocation speech for his graduating Class of 2012. He started his production career for MGM Resorts International, where he produced content for the Las Vegas strip, entertainment venues, restaurants, and in-house media for over 70,000 employees. Easley was trained by industry veterans in videography, editing, graphic design and photography.

Isaac Easley is an Arizona native who lives in Peoria.