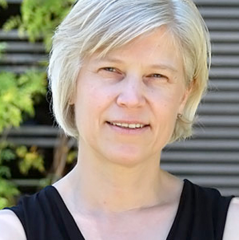 Alexandra Ros is a professor in the School of Molecular Sciences and faculty member of the Center for Applied Structural Discovery (CASD) at the Biodesign Institute. She received her Diploma in Chemistry from the Ruprecht-Karls University in Heidelberg, Germany, and her Ph.D. from the Swiss Federal Institute of Technology, Lausanne, Switzerland. Professor Ros has been interested in microfluidic platforms and their analytical applications, since completing her doctorate. She joined the Biophysics and Nanoscience Group at Bielefeld University, Germany, in 2000 where she followed her interests in microfluidics and biophysics during her post doctoral training. Since 2001, she served as principle investigator at Bielefeld University, Germany, on several projects investigating migration mechanisms and single cell analysis in the microfluidic format. In 2007, she finished her Habilitation and received the Venia Legendi in Experimental Physics from Bielefeld University.

Professor Ros joined Arizona State University in 2008 as an assistant professor where she was promoted to associate professor in 2014. In the same year she was appointed faculty member of the Center for Applied Structural Discovery (CASD) at the Biodesign Institute. In 2015-16, she was a visiting scientist at the Georg-August University Goettingen, Germany. She is recipient of an NSF Career Award, a Fellowship for Experienced Researchers from the Alexander-von-Humboldt Foundation, Germany, the FACSS Innovation Award and the AES Midcareer Award. Dr. Ros was promoted to Professor in 2020. Her current research interests include migration mechanisms in the micro- and nanoenvironment for biomolecules and sub-cellular species with a focus on electrokinetic methods, hyphenation of analytical approaches for single cell analysis, and developing microfluidic tools for emerging crystallography techniques.

The research in my group focuses on the chemical and physical basis of migration mechanisms for biopolymers and colloids as model systems. Tailored micro- and nanofluidic devices are developed wherein migration processes of biomolecules (e.g. DNA, proteins) are studied by optical single molecule as well as ensemble techniques. A second focus lies on the development of micro- and nanofluidic devices as platforms for novel single cell analysis tools. The ultimate goal consists in elucidating novel bioanalytical and biotechnological tools as well as efficient lab-on-a-chip systems for proteom research and systems nanobiology.

Migration mechanisms of biomolecules are studied via fluorescence video microscopy with subsequent particle tracking and on-chip separation experiments. A major interest lies in the dielectrophoretic behaviour of biomolecules which can be advantageously used in separation experiments. A very important part of our work is dedicated to adequate surface design, providing not only for the control of electrokinetic properties in the micro-and nanodevices but also as an additional design tool for novel migration mechanisms. Soft lithography serves as a primary fabrication method for tailored microdevices, whereas other appropriate micro- and nanofabrication methods find application for specific structuring problems. Our single cell studies focus on biologically relevant questions in organisms such as insect cells and bacteria. Single cell manipulation is developed for reproducible and parallel cell positioning. Our work also includes the integration of ultra sensitive detection methods in the microfluidic chip such as laser induced fluorescence as well as off-chip coupling to sensitive state of the art detection methods.