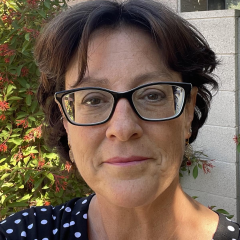 Before joining the history faculty at ASU in 2008, Valerie Adams was an Assistant Professor at Embry-Riddle Aeronautical University in Prescott, AZ teaching foreign policy and area studies in the Global Security and Intelligence Studies program. Trained as a diplomatic historian, she has published on subjects such as President Eisenhower's use of science and technology in national security planning, the relationship between STEM programs and humanities studies in higher education, and various issues regarding the Cold War and domestic policies. She also holds a private pilot's license and has an active scholarship agenda in aviation history.

U.S. Foreign Policy and National Security during the Cold War

Publications not limited to, but include:

o   “Ensuring the Ivory Tower Did Not Fall Behind an Ivory Curtain: James Killian and the Advancement of Science & Engineering in the 1950s.” Essays in Arts & Sciences Summer 2004.