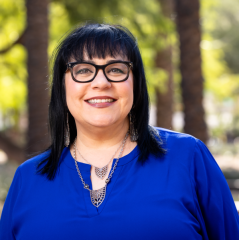 Dr. Traci Morris is the Executive Director of the American Indian Policy (AIPI) Institute at Arizona State University and is a member of the Chickasaw Nation of Oklahoma. Under her leadership, the AIPI has grown and diversified its service to Indian Country providing policy analysis, tribally driven research, and economic development capacity building and working with such Indian Country partners as NAFOA, AISES, and the Indigenous Food and Agriculture Initiative. In her work at both ASU and prior, Morris has worked with Native American nations; Tribal businesses; Native American non-profits; written a college-accredited curriculum; and has advocated for digital inclusion at the Federal Communications Commission and on Capitol Hill.

Morris’s research and publications on Native American media and the digital divide is focused on Internet use, digital inclusion, network neutrality, digital and new media curriculums, and development of broadband networks in Indian Country. Morris spearheaded the groundbreaking Tribal Technology Assessment: The State of Internet Service on Tribal Lands in 2019. Her book, Native American Voices: A Reader, continues to be a primary teaching tool in colleges throughout the country.

Dr. Morris is Affiliated Faculty at ASU's School for the Future of Innovation in Society, an Affiliate of ASU's Center for Gender Equity in Science and Technology, President of the Board of the Phoenix Indian Center, and on the Advisory Council of the Association of Tribal Archives, Libraries, and Museums.  Formerly, Morris served a two-year appointment (2014-2016 and 2010-2012) to the Federal Communications Commission's Consumer Advisory Committee and a one-year appointment (2017) to the Advisory Board for the Department of Labor's Native American Employment and Training Council. As an entrepreneur prior to her ASU appointment, Morris founded Homahota Consulting LLC, a national Native American woman-owned professional services firm working in policy analysis, telecommunications, education, and research assisting tribes in their nation-building efforts and working with Native Nations, tribal businesses and those businesses working with tribes.

Morris has an M. A. and Ph.D. from the University of Arizona’s American Indian Studies, in addition to a B.A. in Liberal Arts from Colorado State University.