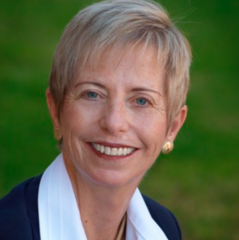 Elizabeth Langland returned to ASU in 2017 as Interim Dean for Humanities in the College of Liberal Arts and Sciences.  She subsequently became Director of the Institute for Humanities Research, a position she held from 2018-2020.  In July of 2020 she was appointed Director of the Lincoln Center for Applied Ethics.

Before returning to ASU in 2017, Langland had retired in 2014 after serving as Vice Provost of ASU's West campus and Dean of the New College of Interdisciplinary Arts and Sciences from 2007-2013 and as Interim Dean of Humanities, College of Liberal Arts and Sciences, from January, 2012 through May, 2013.   Prior to moving to ASU, Dr. Langland served as Provost and Vice President for Academic Affairs at Purchase College, State University of New York, from 2004-2007; as Dean of the Division of Humanities, Arts, and Cultural Studies at University of California, Davis, from 1999-2004; and as Associate Dean for Faculty Affairs at the University of Florida from 1995-1998.

A scholar specializing in Victorian literature, feminist and gender theory, cultural studies and theory of the novel, Langland has authored four books and dozens of articles, edited or co-edited five books, and won several teaching awards.   During her tenure at ASU she was appointed Foundation Professor English; she is also Professor of English, Emerita, University of California, Davis.

Elizabeth Langland is a scholar of Victorian literature and culture with expertise in women and women's literature, critical and feminist theory, theory of the novel and cultural studies.  She is the author of four books, three co-edited volumes, two scholarly editions of Victorian novels, and dozens of articles and essays.