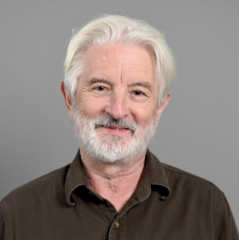 Regents Professor Kurt Weiser studied ceramics at the Kansas City Art Institute under Ken Ferguson and received his master's degree in fine arts from the University of Michigan. He served as director of the Archie Bray Foundation, Helena, MT, for more than 10 years before joining the faculty at Arizona State University in 1988. His early work was porcelain vessels finished in an abstract, nonrepresentational style, but in the 1990’s he began experimenting with china paints. Since then his work has evolved from rich evocations of plant life to narratives which incorporate figures from myth and history into his tropical landscapes, meticulously painted onto porcelain teapots, globes and other vessels, and fired multiple times. The result is “the painting is the three dimensional reality.”

Among the many awards he has received are a Visual Artist Fellowship from the Montana Arts Council, two National Endowment for the Arts Visual Artist Fellowships, an Artist Fellowship Grant from the Asian Arts Council, the Path of Inspiration Award from Interlochen Arts Academy, and the Aileen Osborn Webb Award. In addition, Arizona State University honored him in 1999 by naming him a Regents Professor and he has also been named a Fellow of the American Craft Council. His work has been included in numerous exhibitions including a midcareer retrospective exhibition Eden Revisited and is part of the collections of the Archie Bray Foundation for the Ceramic Arts, the National Museum of American Art, Smithsonian Institution, and the Victoria and Albert Museum in London among many others.