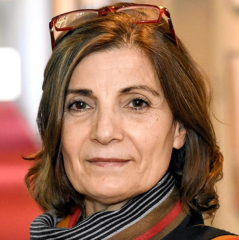 Shahla Talebi is assistant professor of religious studies, School of Historical, Philosophical and Religious Studies, Arizona State University. A native of Iran, she lived through the 1979 Revolution and the Iran-Iraq War and left Iran in 1994 for the United States where she now resides. She received her undergraduate degree in social-cultural anthropology from University of California at Berkeley and her master's and doctorate, also in social cultural anthropology, from Columbia University.

Talebi's research interests include questions of self sacrifice and martyrdom, violence, memory, trauma, death, burial, funerary rituals, commemoration and memorialization or their banning, religion, revolution, and nation-state in contemporary Iran. Talebi’s manuscript entitled "Ghosts of Revolution: Rekindled Memories of Imprisonment in Iran" is forthcoming by Stanford University Press. Recent articles include: “From the Light of the Eye to the Eye of the Power” and "Who is Behind the Name? A Story of Voilence, Loss, and Melancholic Survival in Post-Revolutionary Iran." She discusses the differences and similarities of political prisoners in Iran before and after the disputed presidential election for "The Week in Green."