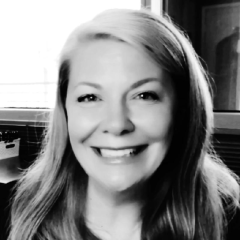 Melanie Asp Alvarez is a longtime broadcast news manager, special projects video producer and educator, who now serves as an Assistant Dean at the Walter Cronkite School of Journalism and Mass Communication. Her focus is on the first-year Cronkite experience, with leadership in undergraduate orientation, curriculum and student success. She also chairs the Cronkite Academic Standards Committee.

For more than a decade, Alvarez served as the assistant news director and executive producer of the student-powered, faculty-led Cronkite News newscast. Airing weeknights on Arizona PBS, Cronkite News has been consistently recognized as the top college newscast in the nation. Cronkite News won Best of Festival for Newscast at the Broadcast Education Association awards in 2018, and first place for newscast as well in 2017 and 2016. The newscast won a 2017 National Student Murrow Award for Video Excellence, was named Best All-Around College Newscast in 2017 by the Society of Professional Journalists, and was a Best Newscast finalist at the College Television Awards in 2015. Prior to that, Cronkite NewsWatch won top national collegiate newscast honors from BEA in 2010, 2012 and 2013; SPJ in 2011; and CTA in 2011 and 2013.

During her time at the Cronkite School, Alvarez has also been the executive producer for "Cronkite: Legend & Legacy" a one-hour documentary tribute to commemorate Walter Cronkite and his enduring impact on the students, faculty, alumni and the future of the Cronkite School.

From 2009-2019, Alvarez produced the honoree tribute video for the annual Walter Cronkite Award for Excellence in Journalism luncheon, working alongside Director of Studio Production Jim Jacoby. These short-form documentaries have gone on to win three BEA National Awards for Excellence and two Telly Awards.

Alvarez also produced the groundbreaking Spring 2020 Cronkite Convocation, the school’s first-ever virtual graduation ceremony held during the COVID-19 pandemic lockdown. The hour-long production included video elements from more than two dozen nationally-recognized journalism professionals, fifty Cronkite faculty and staff members, a half dozen award presentations by Cronkite leadership, and a showcase of nearly 500 formal and candid photos of Cronkite graduates and events. Working again alongside Professor Jacoby for the production, the special event honored more than 400 graduating students in May 2020.

From 2019-2020, Alvarez also served as the executive editor for the Regional Journalism Collaboration for Sustainability, a Corporation for Public Broadcasting-supported partnership of public television and radio stations in Arizona, Colorado and California. CPB awarded Arizona PBS, a member-supported community service which is operated by the Cronkite School, a major grant in 2017 to be the home of the partnership with PBS SoCal and KPCC Southern California Public Radio in Los Angeles, KJZZ radio in Phoenix, and Denver’s Rocky Mountain PBS.

Prior to her time at the Cronkite School, Alvarez worked as a newscast producer at KKTV in Colorado Springs, Colorado; WTSP in Tampa/St. Petersburg, Florida; and KPHO in Phoenix, where she also served as an executive producer for the morning newscast and special projects unit. Alvarez has received several regional Emmy Award nominations, as well as "Best Newscast" and "Best Producer" awards from the Arizona Associated Press. She also served as editor-in-chief of the Daily Trojan, USC's independent student newspaper, and participated in the International Communications Studies Program, spending a summer touring mass media outlets in London, Paris, Prague and Geneva.