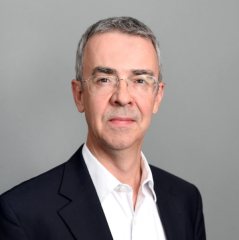 Professor Thornton is currently a professor of electrical engineering in the Ira A. Fulton Schools of Engineering at Arizona State University. He has published more than 150 journal and conference papers and has seven issued patents. He is the founder of RF Micropower, an SBIR-funded company that is commercializing highly efficient RF and power management integrated circuits based on SOI MESFETs, a patented CMOS-compatible transistor technology. His research interests include silicon-on-insulator MESFETs, electronics for extreme environments, electron transport in nanostructures, and bio-molecular sensors.

Prior to ASU, Trevor Thornton has held post-doctoral appointments at the Cavendish Laboratory, Cambridge (1986-88) and Bell Communications Research in New Jersey (1988-1990). In 1990, he took up a lectureship in the Electrical Engineering Dept. of Imperial College in London and was promoted to Reader in 1996. In 1998, he joined the faculty of the ASU Electrical Engineering Dept.  From 1991-1998 he worked as a consultant for the Hitachi Cambridge Laboratory and was a visiting professor at the NTT Basic Research Laboratories in Tokyo in 1990. In 2002, he was a summer faculty fellow at the Air Force Research Laboratories, Kirtland AFB, Albuquerque, NM. He is currently the director of the Nanotechnology Collaborative Infrastructure Southwest. The NCI-SW is the southwest regional node of the National Nanotechnology Coordinated Infrastructure supported by the National Science Foundation.