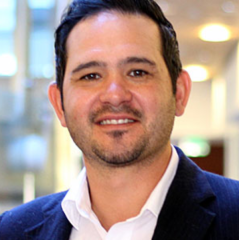 I’ve been fortunate to have worked with some of the greatest minds in Alzheimer’s research. One of the greatest assets to my success as an independent researcher has been the leadership and continuing support from my mentors.  In addition, the brain bank at Banner Sun Health Research Institute has been instrumental in separating some of my work from the rest of the field.  An example of this can be found in my recent report using laser capture microdissection technology, which allowed us to identify unique pathways in human microglia from Alzheimer's, Parkinson’s and normal control brains. Conventional homogenate studies have been at the forefront of transcriptomics research, but unfortunately the meaning of these data thus far has been obscured since brain homogenates produce data that result from many different classes of cells in many different disease states. Our technology, in combination with RNA sequencing has been instrumental in identifying many unique pathways that would have otherwise been missed in conventional analysis

Over the past 14 years my greatest contribution to science has been in the field of epigenetics. This time and effort is demonstrated by the number of published journal articles in well-respected peer reviewed journals. The majority of my work has been on the examination of epigenetic mechanisms in vivo and in vitro. Although there are several notable epigenetic mechanisms, the focus of my research has been on the methylation and hydroxymethylation of DNA.  It has become increasingly recognized that Alzheimer’s is likely to be a multifactorial disorder, with many aberrant biological events that contribute to its pathogenesis and progression—perhaps none of which are absolute.  In fact, the most salient risk factor for developing Alzheimer’s is age.  This makes the etiology and pathogenesis of Alzheimer’s particularly difficult to dissect because most, if not all, of the best-studied abnormalities in Alzheimer’s also occur with age. Although these parallels between aging and Alzheimer’s provide interpretive problems, they may also provide clues to the importance of epigenetics, since one of the best-known drivers of aging processes is epigenetic mechanisms.  Perhaps they, too, drive many of the changes in Alzheimer’s.

Another aspect of research that has been a primary focus in my laboratory is addressing the issue of heterogeneity.       Hundreds of therapeutics for Alzheimer’s disease has failed to make it to market at a cost of billions of dollars.  A number of investigators have suggested that these negative results may owe, in large part, to our choice of targets and the manner in which they are derived.  For example, expression array data from dozens of laboratories, including our own show significant changes in expression of many genes in AD patients compared to normal controls. However, these data are based on brain homogenates, so that the specificity of the changes observed cannot be attributed to any particular cell type and, worse, significant and critical changes in one cell type may have been swamped by lack of change in the other cell types.  As a result, new approaches for AD drug discovery such as Quantitative Systems Pharmacology are muddled from the beginning.  The current work in our laboratory seeks to leverage previous array studies by parsing out specific targets for drug discovery that manifest in specific pathways, occur in specific brain cell types and in specific brain regions. Determining cellular targets can be accomplished by laser capture microdissection.  {Mastroeni, 2017 #3328}

Identifying a method to isolate precursor cells from human brain at autopsy.

Although it was once believed that human stem cells were more or less the exclusive province of embryos, it is now clear that they persist into adulthood as adult progenitor stem cells.  Indeed, studies conducted by our laboratory have shown that highly viable, adult progenitors can be isolated from the subventricular zone of postmortem brain and retained in culture for years.  Because the SVZ is a site of neurogenesis in the aging brain generates great interest in looking at a disease like AD, where impaired neurogenesis has been shown to be an early event.  Our model system puts us in a unique potion to identify mechanisms that are critical to this pervasive human CNS disorder. By establishing a method by which precursor cells may be manipulated to differentiate into a specific class of cell (e.g. neuronal) may provide a useful strategy to circumvent AD-associated brain atrophy caused by neuronal loss.