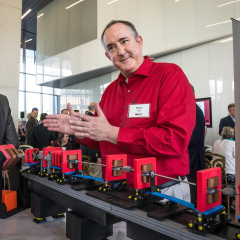 Mark R. Holl received the B.S. degree in mechanical engineering from Washington State University, Pullman, in 1986, the M.S. and Ph.D degrees in mechanical engineering from the University of Washington, Seattle. In addition he two post-doctoral fellowships in bioengineering at the University of Washington, and was a founding memeber of a startup company arising from this post-doctoral work in the area of micro total analysis system technologies. From 2001-2006 he was a member of the research faculty in electrical engineering at University of Washington. Currently Dr. Holl is Associate Director, Technology Development at the Biodesign Institute. His research interests include systems integration for total analysis systems, microscale systems for biological applications, bioprocess automation, sensor development, and process characterization and control with emphasis on, biofuels, bioremediation, biomedical, genomic, and proteomic science applications.